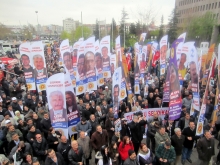 PSI joins EPSU and ITUC in denouncing the Turkish government’s anti-union attacks as well as the abuse of the Turkish legal and judicial system by the authorities against the trade union movement.

On January 13 2014, the first hearing of the case of 502 persons – one of the highest number of defendants ever tried – including the President and General Secretary of KESK and other KESK members, was held in Ankara Kızılay. The charges are causing damage to public properties and using inappropriate violence during a strike and demonstration on 28-29 March 2012 in Ankara. This demonstration attended by thousands of public employees aimed to protest the draft law No. 4688 on Public Employees Trade Unions and a draft amendment to the Law on Education. The police ended the demonstration violently. As a result of the police attack, two demonstrators were severely wounded. A complaint was lodged against the police officers for the damages caused by their violent attack but no criminal proceeding has been launched. The court case was attended by union delegates from Austria, Cyprus, Denmark, France, Germany, Greece, Slovenia, Sweden, UK as well as a representative of ETUC and the EPSU Deputy General Secretary.

On 23-24 January 2014, the first hearing of a lawsuit against KESK’s members and leaders will be held in Istanbul. They were arrested during a police raid carried out 19th February 2013 in the whole country. The police raided the headquarters of the public sector union in Ankara and searched KESK’s members’ residence as well as the public buildings, schools, clinics and offices where they work. Overall, more than 150 persons were arrested on that day, and 47 of them were kept in prisons pending trials including 27 in Istanbul. Court hearings had already been heard in Adana, Bursa, Ismir and Malatya often leading to the release pending trials of unionists detained for months. An international trade union delegation will also be present at this hearing including EPSU General Secretary, Carola Fischbach-Pyttel.

The repression of the trade union movement through constant intimidation, harassment and repression of trade unions leaders and activities has been increasing in Turkey since 2008. 47 members of PSI affiliates are still in jail at the time of writing. Trade union rights violations in Turkey have regularly been put on the agenda of the annual International Labour Conference in Geneva.

PSI calls on the Turkish Government to immediately release all union members arrested under unproven connections to illegal organisations, to lift all bans on meetings and demonstrations and to abide by its European and international obligations to secure the human and trade union rights and freedoms of its workers.