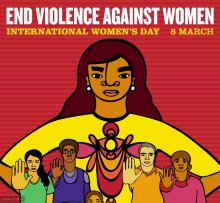 Public Services International joins our members across the globe in celebrating the social, political and economic change and achievements of women on 8th March. PSI promotes the work of women trade unionists and stands united with our sisters who place themselves on the frontline to deliver vital public services.

But there is still much to be done. Violence against women exists in all countries and in all societies. One out of every three girls today will face some form of violence in her lifetime.

PSI General Secretary Rosa Pavanelli says, “We received the terrible news that ten PSI member nurses in Nigeria were brutally shot to death while they were giving an immunization clinic on 8 February. We remember them and will not rest until justice is served in their name.”

Violence against women and girls can be physical, sexual, psychological or economic. It happens in private and public places, and in physical as well as virtual online spaces. Violence is often driven by a deep-seated belief that a woman is not equal to a man.

Pavanelli emphasizes that: “Public sector workers are well-placed to promote and enforce laws and rules that advance gender equality and protection against violence and harassment. Quality public services are often the only shield and support for women in this situation. Violence against women creates inequality, affecting the well-being of current and future generations. Violence and the threat of it deprive women of their basic human rights. We must take action and end violence against women now.”

PSI and our affiliates can work together and with civil society organisations to break the silence and mobilise against discrimination and violence in our workplaces and societies. This can include measures in collective agreements, and pressuring governments to enforce laws, provide the necessary resources to assist victims, and train judicial authorities and the police to deal adequately with issues of violence against women and girls. Equality is a right.

Union women, including PSI members from around the world, are gathering for the United Nations’ 57th Session of the Commission on the Status of Women in New York this month. The aim of this meeting is to agree on a UN resolution on the elimination and prevention of all forms of violence against women and girls. PSI calls on all UN member states to take the necessary measures to immediately prevent and remedy violence against women and girls.

Please see the following list of actions you and your union can take to make a difference and end violence against women.

PSI and its affiliates can:

Dowload the statement as a PDF using the link below.