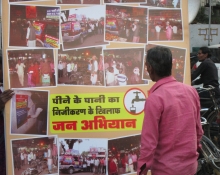 According to Corporate Accountability International, groups plan a series of escalating events to expose the truth about Nagpur’s failed PPP water privatization scheme promoted by the Modi government and World Bank. A group of trade unions in India is addressing a global petition to the World Bank.

The events, part of a nationwide push, are bolstered by a global petition signed by more than 700 organizations from 20 countries and more than 18,000 individuals.

The escalation, endorsed by affiliates of Indian Social Action Forum (INSAF) and Public Services International (PSI), is the latest in a global movement to protect the human right to water from PPPs and similar forms of water privatization.

The mass mobilization aims to prevent Prime Minister Narendra Modi’s government from replicating the failed Nagpur model in its recently launched nationwide pro-PPP urban development initiatives. The programs, including “Smart Cities” and the Atal Mission for Rejuvenation and Urban Transformation (AMRUT), together target 600 municipalities, and Modi himself has called explicitly for replication of the Nagpur project.

"PSI supports the Nagpur workers union and all of the allied organisations in India seeking to raise the alarm about the World Bank’s misguided support for privatisation and so-called Public-Private Partnerships.  We remain mystified as to why the Bank refuses to learn from its mistakes, from its own research.  Perhaps, as a bank, it sees this as a good way to move loans, even if they won’t likely reduce poverty. However, workers and community activists will work to stop the spread of privatisation across India," says Rosa Pavanelli, PSI General Secretary.

In the same sense Jammu Anand, president of NMCEU, a member of PSI that has opposed the Nagpur municipal authority’s water privatization—managed by Orange City Water Pvt. Ltd.—for the last eight years says that “in Nagpur, the PPP scheme has enabled companies to squeeze profits from what should be a public water system, while workers suffer and families struggle to pay unaffordable bills or withstand life-threatening water shutoffs”. He adds that the idea of the Indian government "to expand the Nagpur model—a glaring violation of the fundamental human right to water—to hundreds of cities and millions more people across India is simply dangerous and puts corporate profit before human life”.

Despite the Nagpur model’s disastrous results, the World Bank holds it up as a success story, and Veolia and its competitor, Suez, are hoping to profit from an expansion of water privatization  throughout India. Until 2014, the World Bank even held an ownership stake in the Veolia subsidiary involved in Nagpur. Now, the World Bank, which has widely promoted and facilitated the PPP model, is in discussions with the Modi administration to provide funding for the expansion of this model.

“In the pursuit of these water privatization projects, the World Bank continues to confuse ‘development’ with profit,” says Shayda Naficy, a water privatization expert at Corporate Accountability International. “For years it has ignored the concerns of the people most affected by this dogmatic pursuit, but with people across the globe raising their voices, it can't run from the truth any longer.”

The escalation around the Nagpur case echoes a campaign launched in October 2014 in Lagos, Nigeria, the largest city on the African continent, that successfully led to the cancellation of a proposed World Bank water PPP advisory contract and has so far stalled a large-scale privatization scheme that had once been deemed imminent. Timed with the escalation in India, Corporate Accountability International unveiled a new exposé, “The truth about public private partnerships” debunking common myths about this form of water privatization.

The World Bank’s president Dr. Jim Yong Kim, chief economist Kaushik Basu, top water official Junaid Ahmad, and country director for India Onno Ruhl have neglected to respond to a December invitation issued by the Nagpur-based organizations to receive testimony about the water PPP from Nagpur residents at an event in the city on January 29th.