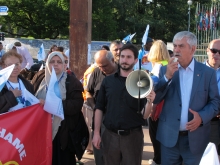 PSI pledges its full support to the general strike called by five major trade union centres and professional organisations on 17 June 2013. PSI joins the ITUC and other global unions in calling on the Turkish government to immediately end police brutality, to respect these protests and trade union actions, and to enter into dialogue to address the legitimate concerns expressed.

Five people have died and some 7,500 people have reported injuries after police attacked demonstrators with tear gas and vicious beatings.

“Intimidation of trade union members and leaders, political and social repression, creating precarious jobs for millions – all this is a far cry from a democracy that generates growth in confidence and respect; instead such policies perpetuate gender and other inequalities,” says PSI General Secretary Rosa Pavanelli.

“We support our affiliates in their struggle for decent working conditions, collective bargaining and freedom of association in an increasingly complex environment.”

Police forces have responded with violent force to peaceful demonstrations in Istanbul and other Turkish cities since 31 May. Coordinated by the group called “Taksim Solidarity” composed of 117 different constituents, including trade unions, the grassroot actions started with peaceful sit-ins to save the famous Gezi Park from development into a commercial site.

According to the Association of Turkish Doctors, “a total of 7,478 people in 13 provinces have applied to public or private hospitals, medical centres, or makeshift clinics set-up close to conflict areas.”

Thousands of people have reportedly been taken into custody, and the whereabouts of many remain unknown. Across Turkey, millions of people have poured into the streets demanding the resignation of the government. The mobilization is estimated by the press to include almost 10 million people, but the figure may be much higher.

Join the LabourStart campaign send a letter of protest - support our Turkish brothers and sisters!