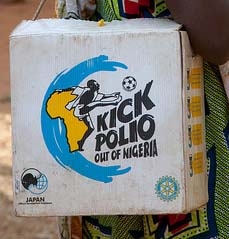 Honouring frontline workers who’ve lost their lives while helping others

On 28 April, International Workers’ Memorial Day, Public Services International and affiliate members join in our workplaces and communities to honour fellow workers who have been injured or lost their lives in the delivery of public services.

This year, we draw attention to the recent horrific assassinations of health workers engaged in the vital global campaign to eradicate polio. Between December 2012 and April 2013, at least 33 people have been murdered while working on polio vaccination campaigns in Afghanistan, Nigeria and Pakistan.  Most have been female health workers, but volunteers, drivers and police officers have also been killed.

On 8 February 2013, nine polio vaccinators in northern Nigeria were brutally shot down and their clinics torched. The dead included five women who were members of PSI’s affiliate the Medical and Health Workers’ Union of Nigeria:  Sadi Mohammed, Jamila Yusuf, Naja’atu Salisu, Hadiza Ibrahim, and Ramatu Abdullahi. Three volunteers, health students, also died.  The violence is rooted in intolerance and when polio campaigns are disrupted, it threatens the health of many children.

“These reprehensible attacks break the Geneva Conventions. Health workers everywhere have the right to carry out their work. It is their professional and ethical duty to provide care and health services to all. We mourn the loss of these brave carers, and vow to make every effort possible to prevent further deaths of health care workers who are helping to build stronger communities.”

On this day, PSI draws attention also to the contributions of workers who respond to natural disasters and risk life and limb to save others.  This includes first responders (firefighters, police, and emergency medical technicians) and all other workers involved in rebuilding our communities after a natural or man-made disaster: water and energy utilities, transport, construction, security and property service workers, and frontline health workers.  As a consequence of climate change, communities are increasingly and more frequently exposed to natural disasters.

Every year, there are over 300 million job accidents that result in more than 300,000 deaths, with another two million deaths due to a job-related disease.  All workers are at risk, but non-unionized workers are at greater risk.  Working poor and women, children and migrants are the most affected because they are the least protected.   The defence of occupational health and safety is a significant benefit of union membership; still there is much to be done to protect workers better.  The benefits are not only in saving workers’ lives and health – the economic cost of poor occupational safety reaches four per cent of world GDP each year.