Turkish trade unionists out of prison 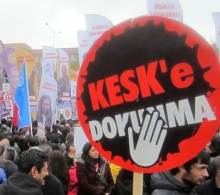 A first hearing results in bail for members of PSI affiliated unions. Twenty-two KESK Turkish trade unionists facing baseless terrorism charges were freed on bail on 10 April 2013 after spending 10 months in prison. Those released included members of Public Services International affiliates representing workers in the public sector as well as members of the teachers’ union Eğitim-Sen.

The judges listened to argument for more than 8 hours and then took 15 minutes to decide to release the 22 defendants after the prosecutor agreed that they should be freed.  According to KESK, the independent public sector confederation which the trade unionists belong to, five defendants were allowed to make their case in Kurdish – illegal until recently.

The 22 trade unionists are part of a group of 72 members arrested on 25 June 2012. The first hearing of the trial on 10 April was preceded by a rally of 500 trade unionists outside the court. A large international delegation was present at the rally and later was part of an over-flowing court room watching proceedings. 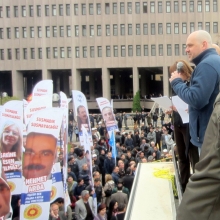 The international labour delegation included representatives from PSI affiliates Kommunal and VISION of Sweden. Jasper Goss, PSI projects officer, addressed the rally: “The struggle of the KESK unions is PSI’s struggle. The KESK unions BES, SES, Yapi Yol-Sen and Tum Bel-Sen are affiliates of PSI and so this is PSI’s struggle as well. We will do everything in our power to defend your rights and freedoms.  We will join with our comrades in the international trade union movement to shine a spotlight on the attacks on trade union and workers in Turkey.”

Manfred Brinkmann, international secretary of the German teachers’ union GEW said: “I think it is a big success of international solidarity.  I have never seen such a great international delegation of trade unions coming from eight European countries.” Brinkmann also noted that the start of peace negotiations between the government and the armed PKK (Kurdistan Workers Party) may have helped.

The trade unionists were mostly held in high security prisons. Osman Işçi is one of the released KESK members. He is also on the executive committee of the Turkish Human Rights Association (IHD) and the Euro-Mediterranean Human Rights Network (EMHRN). He described his imprisonment:
“We were three in every cell. And we had the right to see our family (only) an hour per week. That means four hours a month in total and I have the right to talk to my family 10 minutes a week; and to see other detainees for three hours in a week… It was absolute isolation.”

KESK is not the only part of civil society facing harsh government repression. Lawyers, journalists, members of legal parties and students face continuous harassment under wide-ranging anti-terrorism laws which the government uses as a means to suppress independent trade unions.

Amnesty International and other human rights bodies have often criticised the laws on terrorism and the justice procedure. On 22 February 2013 Amnesty stated: “The government must amend the vague and overly broad definition of terrorism in Turkish law, to bring it into line with international standards.”  Amnesty also criticised “the widespread abuses in anti-terrorism prosecutions.”

Many other KESK members remain in prison and many more – including the 22 released members – still face trial.