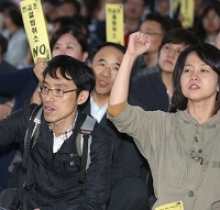 PSI calls on all its members to request the authorities of South Korea to recognize the Korean Government Employees' Union (KGEU), to refrain from cancelling the registration of the Korean Teachers' and Education Workers' Union (KTU) and to amend its legislation in line with ILO recommendations.

Public Services International, Education International and the International Trade Union Confederation (ITUC) have jointly launched a campaign on LabourStart in support of KGEU, KTU and their members. PSI invites you and your members to take action now and to join the appeal.

In a one-month ultimatum sent to the Korean Teachers and Education Workers’ Union (KTU) on 23rd September, the Korean government has threatened to deregister the teachers’ union if it does not amend its by-laws to ban dismissed and retired teachers from their union membership. The KTU will be deregistered unless it revises the provision in its by-laws by 23rd October 2013.

Currently, KTU’s constitution allows dismissed workers to remain members of the union. Members of the KTU were dismissed during the previous administration for their activities including expressing their opinion on the government's education policy or for donations to progressive political parties. These workers, whose dismissals are also suspect under international law, have been considered members of the KTU by its by-laws.

In addition, the Ministry of Employment and Labour has refused, for the fourth time, to register the Korean Government Employees' Union (KGEU), even after the KGEU had engaged in extensive negotiations to attempt to address the government’s concerns. The KGEU continues to call for the reinstatement of 135 trade union members who were dismissed because of their affiliation to the KGEU.

The Korean Trade Union and Labour Relations Adjustment Act (TULRAA) contains provisions prohibiting dismissed and unemployed workers from keeping their membership and making non-union members ineligible to stand for trade union office – in violation of international labour law. The International Labour Organization (ILO) and the National Human Rights Commission of Korea (NHRCK) have repeatedly criticized these exclusions of dismissed and unemployed workers, and recommended the government to amend its legislation in order to comply with international labour standards.

The Park Geun-hye administration prefers to ignore all those recommendations and is now threatening to delegalize the teachers’ union KTU unless it revises the provision in its by-laws by 23rd October 2013.