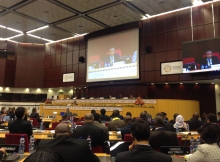 On 16 July, the Financing for Development Conference (FFD3) has come to an end by adopting the Addis Ababa Action Agenda on FFD. PSI joins the trade union movement and civil society partners in their rejection of the outcome, which will be neither transformative nor deliver the future we want.

The Addis Ababa Agenda for Inaction – or Development for Finance?

While the Addis Ababa Action Agenda (AAAA) claims to leave no one behind it succeeds in perpetuating a culture of exclusion. Due to extreme pressure by a number of industrialized countries, the negotiations were not only flawed, but also lacked good faith since the declared goals of the agenda and the recipes it provides are not compatible. Public Services International and other trade unions believe the Addis Ababa Action Agenda lacks ambition and commitment, making business worse than usual, showing a deficit in terms of social dialogue and leaving many open questions about its follow-up.

The agenda refrains from addressing the urgent need to reform the international tax system so that the massive illicit flows out of Africa, due to tax evasion and avoidance, will continue to prevent the continent from flourishing. Loss in tax revenue exceeds development assistance many times over, while also in developed countries multinationals pay a fraction of what is due.

Rosa Pavanelli, PSI General Secretary, says: “Tax justice and an intergovernmental tax body, under the auspices of the United Nations, are urgently needed. It is unacceptable that only the richest countries define tax rules, while developing nations are not allowed to sit at the table. A great opportunity was missed in Addis Ababa, but this is not the end of the road.”

This measure had been advocated by many G77 countries and strongly backed by PSI, the Global Alliance for Tax Justice members and allies. Establishing such a political body on tax within the UN was seen as an effective way to ensure developing countries could increase domestic resource mobilization through fairer international tax policies.

In the months leading up to this conference and throughout the FFD3 negotiations, PSI has held the opinion that this agenda could end up being nothing more than a vehicle for privatization and maintaining the status quo. The AAAA commits to “a new social compact to end poverty in all its forms everywhere, delivering social protection and essential public services for all.” However, a commitment to universal access to social infrastructure and inclusive social services was already part of the Doha FFD Review. The AAAA weakens such pre-existing commitment by qualifying it as applicable when “nationally appropriate” and “fiscally sustainable” – which is typically associated to the calls to impose user fees on services or just cut them.

Rosa Pavanelli continues: “Decent jobs with decent wages, social protection, access to public services and progressive fair taxation systems are key to sustainable development. This agenda pushes the promotion of PPPs and the role of the private sector beyond the contribution it can and needs to make. At the same time, the central responsibilities of the state to protect and secure the human rights of its citizens and the environment, to define and implement development strategies are not at the core of this agenda. Unconditional criteria are needed to ensure that private sector intervention is in line with the public interest, especially where public resources are used to support the private sector. We will continue to insist essential public services including water and sanitation, health and education, should be excluded from PPPs, blended finance and trade agreements. Development without public services is mission impossible.”

As put by the Women’s Working Group on Financing for Development “The AAAA might leave the impression to some that it is strong on gender equality, women’s empowerment and women’s rights. However, while the AAAA, importantly notes in the first paragraph a commitment to respect all human rights, including the right to development, and that member states will ensure gender equality and women’s and girls’ empowerment, it lacks an integrated, consistent and explicit human rights based approach.” Indeed, the lip service paid to the rights of women and girls does not mean much without tackling the structural barriers to gender equality. Moreover, the AAAA takes at times the unhelpful position of instrumentalizing women’s rights, by speaking of them as a means to economic growth, rather than an end in themselves as recognized in UN norms and principles.

The outcome document also undermines the potential of the UN as the world's most universal and inclusive body, thereby keeping power and control exclusively in the hands of the G7, the G20 and the Bretton Woods Institutions they control.  The role of the UN in setting global rules and processes on tax and debt is necessary precisely to institutionalize fair governance for the next 15 years of the Sustainable Development Goals starting in September this year.

“PSI will continue its actions in the coming months in coalition with other trade union and civil society organizations, leading up to the adoption of the Post 2015 Development agenda and beyond, calling for a people-centered, human-rights based approach that can really deliver a transformative agenda. In order to end poverty and save our planet, putting people before profit is part of the solution.”