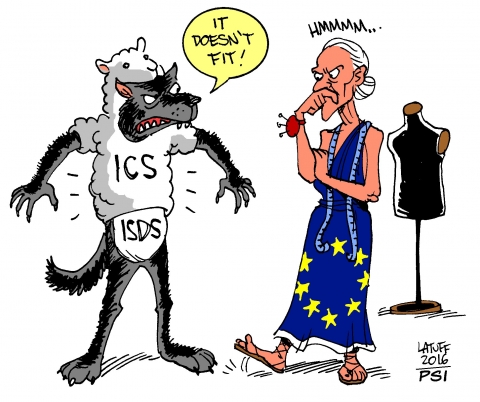 Today, the trade union federation that represents public sector unions globally, and in Europe, released research showing that the European Union’s proposal to create a new investment court could open governments to hundreds of court cases costing billions of dollars.

Public Services International (PSI) has sent copies of Investment Court System (ICS): The Wolf in Sheep’s Clothing to all MEPs urging them to reject the EU’s “great corporate rebrand”.

The research shows that only 1% of USA-based investment is currently covered but under the new proposal in the TTIP 100% would be covered, potentially creating a flood of cases.

“Why are our governments giving rights to foreign corporations that local companies and local workers don’t have? Allowing the most powerful corporations on the planet to take taxpayers’ money is a recipe for increased austerity and cuts to public services” she said.

The study shows that in 2003, the Czech Republic paid a corporation US$354 million, then the equivalent of the countries health budget. Ecuador has just started paying US$ 1.1 billion to a US-based oil company – 90% of its social welfare expenses budget for 2015.

The study points out that the fundamentals have not changed to a system that gives 94.5% of known awards to companies with at least US$ 1 billion in annual revenue or to individuals with over US$100 million in net wealth.

The study also points out that ICS is not judicially independent nor would it protect governments from having to pay compensation to corporations for making lawful, non-discriminatory laws to protect workers, health or the environment. Worryingly, collective bargaining agreements amongst social partners could become the target of lawsuits.

The European Commission (EC) recently released its proposal for ICS claiming that it was a new gold standard. Many regard the move as an attempt to quell public anger following a record 150,000 people responding to the EC’s public consultation on ISDS with over 97% rejecting it. At the time the EU trade chief, Cecilia Malmström, said ISDS had become “the most toxic acronym in Europe”.