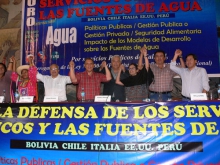 In late March 2014, Rosa Pavanelli, the leader of Public Services International (PSI) joined members of Peruvian affiliate FENTAP on the frontline of their fight to keep public water services.

On 29 November 2013, asserting that reforms were needed to improve the management of water resources in the country, the Peruvian Ministry of Housing proclaimed Law No 30045, the Modernisation of Sanitation Services Law. The law’s stated aim is to increase access, quality, and sustainability of potable water and sanitation infrastructure throughout the country while keeping watch on environmental protection and social inclusion in the provision of such services. One of its primary stated objectives is to reduce the gap in access to sanitation especially for people of limited resources, particularly in rural areas.

However, in order to carry out these noble aims, the law opens the gate for privatization by providing a regulatory mechanism under which private and public/private partnerships can operate. It allows the transfer of resources to private entities that would provide services under rights granted by local governments, including the right of exclusive jurisdiction in the management of services.

Congress approved this legislation apparently without debate and without consultation with experts, municipal authorities, consumers and public service employees.

As soon as the law became public, the National Federation of Water and Sanitation Workers of Peru (FENTAP) mobilized to voice its opposition and fight the move.

“This law is an assault”

According to Luis Isarra, President of FENTAP, the new law is clearly designed to lay the groundwork for the privatization of Peru’s water supply. “This law is an assault on workers and citizens,” he asserts. “It robs us all of our human right to water and sanitation.”

And FENTAP is not alone in this battle.

The global union federation, Public Services International, representing 20 million workers in over 150 countries, is lending FENTAP its full support to fend off this latest privatization drive. To this end, PSI’s affiliate unions have helped organize the first official citizens’ petition to stop water-supply privatization in Peru. As a result of this campaign, it is anticipated that President Ollanta Humala will receive thousands of letters.

PSI Secretary General Rosa Pavanelli is calling on President Humala to repeal this law and not hand over vital public services to the for-profit sector. “We need to protect water as a human right, not as a commodity that can be sold for corporate profits,” she says.

PSI and its affiliate members support FENTAP’s struggle, she says, because it is a vital part of the global struggle for the well-being of people and the planet. 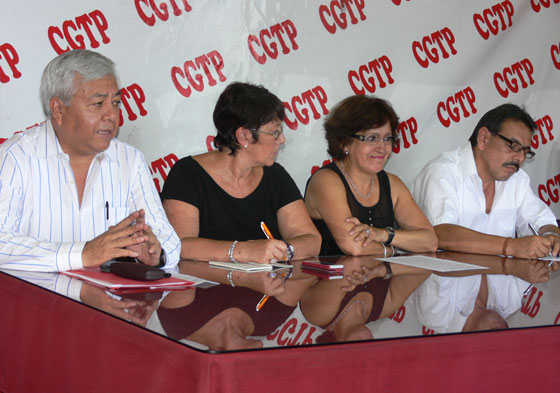 On the eve of United Nations World Water Day on March 22, Isarra and Pavanelli, along with PSI’s affiliate unions in Peru, community allies and a panel of experts, gathered in an international forum to engage the public in a thorough debate about water privatization. To everyone’s surprise, the electricity was cut off during the first day of the two-day-session.

However, as Pavanelli observed when it came time for her speech: “We can live without electricity, without microphones, even without responsible media, but we cannot live without water. And that is what this fight is all about.”

Pavanelli provides a long list of cases in which the privatization model had completely failed.

“The largest number of water privatization reversals has taken place in Europe, where the most telling example is France, the cradle of water privatization,” says Pavanelli. “Over the past decade, more than 40 municipalities there, including Paris, Rennes and Grenoble, have re-municipalized their water services. In Germany, Berlin and Leipzig re-municipalized their water services following a referendum. The same thing happened in the Hungarian cities of Budapest, Pecs, and Kaposvar. In Italy, a huge public water movement came together, with 97% of those voting said to keep water services in public hands.”

But the privatization model has not been rejected only in Europe. According to Pavanelli, it has been rejected in Atlanta, Indianapolis, Tanzania, Ghana, Malaysia, Indonesia, and a number of other places.

Why is this model failing everywhere?

“It is failing because access to water and quality did not improve in any of those municipalities. If anything, it worsened,” Pavanelli explains. “In Jakarta, for example, drinking water is still not available in the city – despite the fact that the water system has been in private hands for over 14 years. There, people got 14 years of the most expensive dirty water in the world.”

In harrowing detail, Patricia Jones, Programme Manager for Environmental Justice at the Massachusetts-based Unitarian Universalist Service Committee and one of FENTAP’s allies in this struggle, captured the essence of consequences faced by the poor, by ethnic minorities and the elderly in Boston. Jones recounted stories of families whose access to water was cut off and whose children were consequently taken away from their parents and placed in State institutions. She also told the stories of elderly Americans who each month had to make a choice between food, water and medication. “This is a brutal practice. In Boston, there are currently 8,000 households at risk of having their access to water cut off. And, according to a study we conducted, that risk is four times greater for ethnic minorities,” declares Jones.

What happens to those who do not have access to water?

Esther Hemeregildo is the president of San Juan de Lurigancho’s Pueblo Joven 10 de Marzo and one of FENTAP’s community allies. Hemeregildo sat in the back, carefully listening to the speakers. She carried a red banner reading: “To defend water is to defend life.” Hemeregildo, mother of three, has been fighting to gain access to water for the past 10 years. Time and again, municipal authorities have told her that there is no budget available to provide her with public water. Her children have had numerous health problems as a result of deficient sanitation. Every day, she and her children descend the hills of San Juan de Lurigancho to purchase water that is being trucked into her community. “Buckets in hands, we have to climb 90 steep steps twice a day to take home this precious resource. Sometimes, I am too tired to work.” Asked what she does for a living, she replies: “I build coffins for the dead.”

Josefina Gabriel Rojas (pictured left), a water worker union leader in Huancayo, lost her job when she fought against privatization efforts at her local municipality. She was only reinstated four years later. She has since promoted at work the idea of public-public partnerships, in which two water utilities pool resources to acquire power and technical expertise, but her suggestions have fallen upon deaf ears. “Now, I am also part of a defence movement to help protect headwaters that are increasingly at risk from the toxic pollution of mining operations in the region,” Gabriel explains. “We need to defend our headwaters, because our lives depend on them.”

Like Gabriel, representatives from indigenous and non-indigenous communities told the audience about the negative impacts of resource extraction activities on headwaters and wetlands. They also spoke of the increasing number of social conflicts facing their communities. According to Peru’s Ombudsman, more than half of the conflicts recorded in the country are socio-environmental. Most of them are water-related. Among representatives from Cajamarca, Espinar, Kanaris, Tía María and Iquitos was renowned environmental activist Marco Arana.

As the forum came to a close, participants rushed from their seats to have their photographs taken beside Arana and Isarra, fists held high in a sign of solidarity.

“It is worth noting that a 625 ml bottle of commercial water retails for 1.50 soles* – equivalent to 2,400 soles per cubic meter. In Peru, public utilities charge just 1.50 soles for a cubic metre of treated water,” Isarra explains to people around him. “Perhaps, in this way, we can better understand the value provided by our public municipal water services – and the enormous profits to be made in the private water business.”