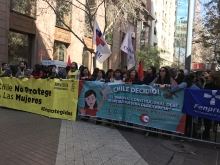 Three years ago, the PSI Women’s Committee in Chile decided to support this struggle with a range of actions, including lobbying parliament, visits to the national congress, alliances with women’s organisations and raising the profile of this issue in the street and in the press.

On Monday, 21 August, the judges of Chile’s Constitutional Court rejected by six votes to four the two requests presented by ChileVamos (right-wing parties) against the bill that decriminalises abortion under three circumstances, leaving the president, Michelle Bachelet, free to promulgate the law, which has been approved by parliament. The bill legalises abortion when a woman’s life is at risk, when a  foetus is not viable and in cases of rape.

“This is a historic day for Chile. After three years of discussing the bill on abortion under three circumstances, it was finally approved this afternoon. This will restore women’s right to decide about their own pregnancies”, said the president of one of PSI’s affiliates in Chile, the National Federation of Health Service University Professionals (FENPRUSS), Gabriela Farías, outside the court.

Just after 2pm, the court announced its verdict and approval of the abortion bill in each of the three circumstances. Members of trade unions and social movements and others waiting outside the court reacted jubilantly and celebrated by marching to the La Moneda Palace to thank the authorities for making the bill a reality.

“As a municipal health organisation, we work directly with women who are affected by these circumstances. Women in the most vulnerable sectors of society are the most affected by the lack of public policies to provide access to safe abortion when their situation does not allow them to continue a pregnancy”, said Carolina Espinoza, gender officer at the National Confederation of Municipal Health Workers’ Confederation (CONFUSAM), affiliated to the PSI, and a Southern Cone representative on the PSI’s World Women’s Committee (WOC).

Before Michelle Bachelet, no Chilean president had proposed the decriminalisation of abortion, which the dictator Augusto Pinochet criminalised in 1989, shortly before leaving power. Indeed, Bachelet herself avoided presenting a bill on abortion during her first term in office in 2006-2010.

To propose a law on abortion in Chile involved confronting, among other groups, the most conservative sectors of the Christian Democrat party, one of the biggest parties in the coalition and the same party that brought to power Patricio Aylwin (1990-1994), Eduardo Frei (1994-2000) and Ricardo Lagos (2000-2006). However, the president decided to use her political capital to support  this initiative, even though she was already facing an intense debate on tax and education reforms when she signed the bill.

"Bachelet had the courage to deliver on the government’s commitment in one of the few countries in which abortion is a criminal offence and in a society that, since the time of the dictatorship until the present day, has found it difficult to discuss sexual rights issues", Mané Salamanca, head of the UN Women’s Office in Chile, told the media.

Marcia Lara, Vice-President for Women at the National Group of Tax Employees (ANEF), affiliated to the PSI, described the verdict as “a victory, especially for women and especially with regard to cases of rape. Many women in this country have been subjected to torture for years, having been raped and then forced to give birth to their child”.

Hard work conducted by a range of institutions and many social organisations at each stage of this long process resulted in the bill becoming law.

Three years ago, the PSI Women’s Committee in Chile decided to support this struggle with a range of actions, including lobbying parliament, visits to the national congress, alliances with women’s organisations and raising the profile of this issue in the street and in the press. Chile triumphed and women won more rights to equality!