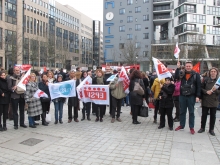 The ‘’one-in one-out deal” refers to the proposal between EU and Turkey to return irregular migrants crossing from Turkey to Greece. For every Syrian who is turned back from Greece to Turkey, the EU will take in another Syrian already in Turkey into the EU.

“The proposal is immoral as it treats international humanitarian and human rights obligations like a commodity exchange. Migrants, asylum seekers and refugees are human beings. We cannot allow States to embark on deals like this that undermine the inherent dignity and the equal and inalienable rights of every human being,” says Jan Willem Goudriaan, General Secretary of EPSU.

“After putting up walls within Europe, this EU-Turkey deal goes a step further by containing migrants and refugees anywhere but outside Europe. Effectively, the EU is making deals to “outsource” its obligation to international protection and human rights to its poorer neighbouring countries. This is a violation of international and European Conventions and must be rejected,” says Rosa Pavanelli, General Secretary of PSI.

The European Trade Union Confederation (ETUC), United Nations High Commissioner for Refugees, civil society organisations and some members of the European Parliament have condemned the proposal as it contravenes the UN 1951 Refugee Convention, the European Convention on Human Rights and the EU Charter of Fundamental Rights.

Under the UN Convention, asylum claims should be assessed on an individual basis, rather than being subject to a blanket policy. Refugees cannot be returned to countries that are not state parties to the UN Convention. Though Turkey signed the UN Convention, it limits its protection obligation to refugees coming from Europe. A recent PSI report highlights how the "temporary status” accorded to refugees in Turkey is a serious challenge to them in accessing their basic human rights, particularly the right to healthcare.

Public service trade union delegates from Europe, Middle East and Africa met at a PSI/EPSU Seminar “Public Services Welcoming migrants and refugees” on 14-16 March in Brussels, with the participation of the ETUC, UNHCR, European Commission, ILO, and PICUM.

Delegates of the meeting are joining the mobilisation today in Brussels calling for the rejection of the EU/Turkey proposal to keep refugees out of Europe. We want bridges not walls!