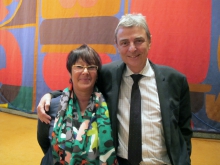 The agenda covered all items relating to the implementation of the Programme of Action with a special focus on the global campaigns PSI is leading on trade agreements and tax justice.

The Committee underlined the importance of PSI initiatives on trade agreements, including affiliate and ally mobilisations in many countries, and stressed the need to go further with the campaign in 2015 with new arguments and analyses. These will be crucial to blocking the adoption of some of the agreements (particularly CETA, TPP and TTIP) as well as the negotiations on TISA.

The issue of tax justice is now on the agenda of international institutions (G20, OECD, IFIs), and must be proposed as a fundamental item on the post-2015 Agenda as a means of eradicating poverty and ensuring appropriate funding of public services.

Trade union rights continue to be PSI’s core business in response to the widespread violations of fundamental workers’ rights around the world. PSI needs to contribute to the initiatives to protect the right to strike which is under attack from the Employers Group in the ILO and from many governments’ reforms.

In confirming the sectoral activities’ agenda, the Committee commended the creation of the new Education Staff Support sector, and agreed on the importance of covering the position of Municipal Sector Officer, vacant since Rolv Hanssen’s departure.

The Steering Committee also endorsed the work PSI is already doing on corruption, a fundamental part of the work in finding alternatives to austerity to fund public services.

The Committee approved the creation of a working group on pension funds to work on specific issues, including pension funds and PPP infrastructure investments; attacks on defined benefit funds, and support for shareholder initiatives, as appropriate.

The Steering Committee also confirmed the work on emergencies and disasters, which will concentrate primarily on supporting first responders with a special focus on firefighters. PSI will participate in the UN World Conference on Disaster Risk Reduction in Sendai Japan, 14-18 March 2015, and Japanese affiliates are already working to support PSI in this work. PSI regional secretaries will suggest names for the working group on emergencies and disasters.