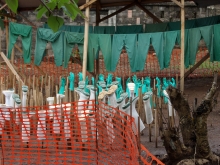 The Congolese population has no access to a qualitative health system as, especially in the provinces, the health structures are in an advanced state of decay. Health service providers are neither adequately nor continuously trained to strengthen their capacities and enhance their knowledge about the disease. [This article is an extract from the 2016 Update "PSI trade union response to the Ebola Virus Disease".]

The last evaluation, commissioned by PSI in 2012, ascertained that the health professionals in the Democratic Republic of Congo (DRC) are working under exceptionally bad circumstances, characterised by a growing need for protective equipment, leaving the workers exposed to contaminations and the risk of dying due to the occurrence of diverse epidemics, such as STI/HIV-AIDS and the Ebola Virus Disease.

Because of the isolation of the far away regions, the Ebola virus is less able to spread as it did in the West-African region, and therefore does not seem to attract the same international attention, but it keeps reoccurring and is as deadly and contagious as elsewhere. Over the last years, the DRC has experienced several deadly occurrences of the Ebola Virus disease, leading to many victims in the population but also among the health workers because of the lack of decent protective equipment. Furthermore, nurses, especially those working in the North and South Kivu provinces, Orientale and Equateur, where armed conflict repeatedly re-emerges, are often confronted with violence at the workplace. Not only are health professionals not protected, the families of the deceased victims of the virus have never been compensated or been taken care of by the state.

The DRC has never ratified ILO convention 149 on “Employment and Conditions of Work and Life of Nursing Personnel” and convention 151 on the “Protection of the Right to Organize and Procedures for Determining Conditions of Employment in the Public Service”. The health state does not meet the needs of the activities that are supposed to be organised for the population. The DRC is a country with a very high potential for epidemics and only about 5% of the overall budget is allocated to health.

In addition, resources attributed to health facilities are badly managed, if ever they arrive in the facilities at all. Under these circumstances, the sanitary structures are incapable of offering universal coverage and protection against health crises such as Ebola and HIV/AIDS.

PSI affiliate SOLSICO, the Union Solidarity of Congolese Nurses, is taking up the challenge and participating in the Ebola Response Strategy. A first big challenge is the scattered union landscape in the DRC. Only doctors, who have a specific status, are involved in the elaboration of policy. Nurses and health workers’ unions have never been involved in the decision-making process on crisis preparedness, nor in the reform of the Congolese health structures. This causes a lot of frustration and widens the gap between the different professional categories in the health sector. SOLSICO is now trying to get the different health unions around the table for a better collaboration.

However, SOLSICO does not restrict its activities to the union environment and has been reaching out to different civil society actors, in an attempt to create a large network of support for improvements in the health sector, an increase of the health budget, the ratification and implementation of the ILO conventions linked to the Conditions of Work and Life of Health personnel. A network that can take its place in the consultations and decision-making process on the eradication of the Ebola Virus Disease, crisis prevention and general health issues.

In preparation for this, SOLSICO works with the Ghanaian Health Service Workers Union (HSWU) to pick up tips on fruitful union collaboration and the coordination of joint long term campaigns.