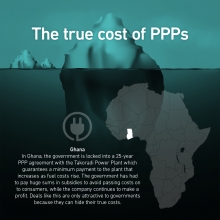 Trade unions and campaigners from around the world are boycotting the latest World Bank consultation on PPPs, due to close on 28 February.

Research shows that  Public Private Partnerships (PPPs – agreements with the private sector to provide infrastructure and services normally delivered by the state – are risky and expensive and contain numerous hidden costs. Currently, most governments leave information about future debts, or contingent liabilities, out of their accounting books, making PPPs look cheaper and more efficient that traditional public procurement.

Trade Unions and NGOs the world over have launched the boycott after their concerns about these hidden costs have been repeatedly ignored by the World Bank – one of the biggest institutions promoting, arranging and funding PPPs in some of the poorest countries in the world.  The organisations supporting the boycott said that they will no longer participate in public consultations until the World Bank explicitly calls on countries to only consider PPPs if their full costs and contingent liabilities are reported on-balance sheet and registered as government debt. The expected costs and impacts of PPPs should also be examined in advance, and compared to other methods of delivering the public service.

“Public services are massive pools of potential corporate profit, and PPPs serve to access them. The ‘clients’ are captive, the services are often monopoly,” comments David Boys, Deputy General Secretary of PSI.  “Research has shown that PPPs have failed to live up to their promise. In most cases, they are an expensive and inefficient way of financing infrastructure and services, since they conceal public borrowing, while providing long-term state guarantees for profits to private companies.

Maria Jose Romero, Policy and Advocacy Manager at the European Network on Debt and Development (Eurodad) said: “We are not against the private sector having a role in development projects. What we are against is expensive and risky projects that are devised behind closed doors away from public scrutiny and which leave the public sector with the majority of the financial risk. This is what PPPs too often are.

“We want to see all costs published in government balance sheets, including future debt, and we want full transparency for negotiation and renegotiation of contracts. Without this, the private sector will reap all of the benefits and the public will be the ones that suffer when costs escalate and governments have to foot the bill.”

More than 75 trade unions, including many PSI affiliates, and NGOs from four continents have signed a letter to the World Bank explaining their reasons for the boycott and calling again for change.

The current consultation that is boycotted by Trade Unions and campaigners is in relation to contractural provisions in PPPs: https://consultations.worldbank.org/consultation/recommended-public-private-partnership-ppp-contractual-provisions

PPPs that have led to crippling debts for developing country governments include:

Lesotho: “According to an Oxfam study, the Queen Mamohato Memorial hospital in Lesotho, financed and supported by the World Bank, shows how problematic a PPP project can be. This project locks the government in until 2027 and swallows up more than half of the country’s health budget, while giving a high return of 25% to the private sector provider. This has diverted much needed public funds from hospitals in rural areas, where three quarters of the population live.” See: https://www.oxfam.org/en/research/dangerous-diversion

Ghana: According to research by the Jubilee Debt Campaign, the Takoradi 2 Oil Power Plant has a 25-year agreement where the government has guaranteed to pay a minimum amount, which increases as fuel costs rise. This guaranteed payment is denominated in dollars, rather than in the Ghanaian cedi. This was estimated at the start of the contract at an annual 20% return on the company’s investment, but it could turn out to be higher. Meanwhile the government bears all the risk of oil price increases and depreciation of the cedi against the dollar. Devaluation over the contract’s first ten years rapidly increased the cost of electricity from the plant, with the Ghanaian government protecting consumers to some extent by providing subsidies so the full cost of these increases was not passed on, but was borne by the Ghanaian government. Between January 2014 and April 2015, the Ghanaian cedi has devalued by 40%, which will have only increased the costs further. Government expenditure on the subsidies may continue to increase because of the PPP agreement, since the escalating costs cannot be covered purely by tariff increases. See: http://jubileedebt.org.uk/wp-content/uploads/2016/10/The-fall-and-rise-of-Ghanas-debt_10.16.pdf
Tanzania: According to research by the Jubilee Debt Campaign, Tanzania has a lot of hidden obligations from PPPs. Three PPPs have been implemented for power companies to supply electricity, at a pre-determined price guaranteed by the government, to the state-owned distributor Tanesco. The first of these was with Independent Power Tanzania Limited for a diesel fuelled power plant in Dar es Salaam. The second was with Songas, which when it started in 2004 was majority owned by the UK government through Globaleq, a fully owned subsidiary of the Department for International Development’s CDC Group. By 2007/08, the Tanzanian Controller and Audit General found that these two power companies were costing Tanesco 90% of its total revenue, and that Tanesco is overburdened by the liabilities imposed by various power purchase agreements. Despite these problems, a third electricity PPP was signed with Richmond Development Corporation in 2006. A 2008 parliamentary inquiry found that Richmond had been granted favourable terms in the contract. Towards the end of 2008 the new government announced it was cancelling the contract, but Dowans Holdings, which had bought the contract, sued Tanesco through the International Chamber of Commerce, which ordered Tanesco to pay $124 million. Tanesco increased tariffs by 40% in 2009, yet it was still making a large loss. In 2013, the IMF estimated that government subsidies for electricity cost around 10% of government revenue. Much of this is used to pay the inflated costs in the power generation PPP agreements, so it is effectively a subsidy to the private companies rather than to Tanzanian citizens. See: http://jubileedebt.org.uk/wp-content/uploads/2015/07/The-new-debt-trap-report.pdf