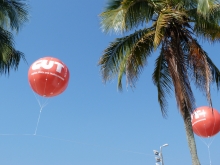 An international delegation of 15 PSI delegates joined Brazilian affiliate members at the Trade Union Assembly in Rio - raising their voices for decent green jobs supported in part by the implementation of a financial transactions tax.

Over 100 trade union centres from across the globe, gathered in Rio de Janeiro for the II Trade Union Assembly on Labour and the Environment from 11 to 13 June, a few days ahead of Rio+20, have called on governments to undertake a process of profound change in all areas of economic life. Trade unions are defending the sustainability of the planet, its inhabitants and future generations.

The final statement drawn up by the Assembly calls on governments to acknowledge that "social protection is a human right, in line with ILO Convention 102 on Social Security (Minimum Standards) and ILO Recommendation 202 on national social protection floors, and to provide, facilitate and extend social protection coverage".

The Assembly's final document also advocates the introduction of a Tax on Financial Transactions at global level. The trade unionists argue that the revenues from such an initiative could contribute to the fight against climate change, to development and the re-regulation of the financial sector.

"Enough talk! Governments must make real commitments towards change. Humanity needs a radical change of direction in favour of sustainable development. The trade union movement will be present at Rio+20, along with other social movements, to make this change possible," said Sharan Burrow, general secretary of the International Trade Union Confederation (ITUC).