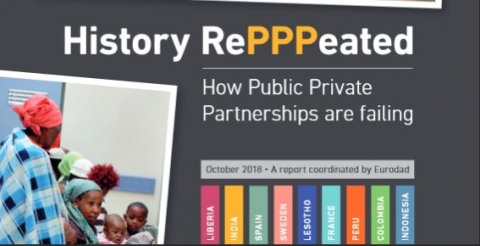 Experts call for World Bank Group to end aggressive promotion of PPPs for public service provision. A new report exposing how public private partnerships across the globe have drained the public purse and failed to deliver in the public interest will be launched at the Annual Meetings of the World Bank in Bali next week.

History RePPPeated: How public private partnerships are failing has been written by experts across four continents from many civil society organisations. They expose the negative impacts of PPPs that have often caused misery to local communities.

The report shows that multilateral development banks, such as the World Bank Group (WBG) have played a leading role in providing advice and finance for PPP projects in different sectors. This is despite the mounting evidence showing that PPPs are expensive, risky and opaque.

PPPs divert funding from the public purse to private bank accounts. Instead of creating for-profit structures with tax payer’s money, we need investment in public goods such as health, education and water and sanitation.

PPPs do not deliver for communities and we call for a stop to these funding mechanisms by the International Financial Institutions before they increase inequalities even further.

Last year, EURODAD  launched a campaign manifesto in which more than 150 civil society organisations from around the world, including PSI, called for an end to the aggressive promotion of PPPs. There is overwhelming evidence of the harm they cause.

Some of the main findings are:

The case studies include the Queen Mamohato Hospital in Lesotho, which is bleeding government coffers largely through huge costs for the treatment of patients; and the case of Jakarta Water in Indonesia, where two PPP contracts resulted in huge losses for the public water utility, while residents often have to rely on groundwater from community wedge wells, or buy expensive water in jerry cans.

The report recommends that the WBG, the International Monetary Fund (IMF) and other public development banks, together with the governments of wealthy countries that play a leading role in these institutions:

Listen to members of affected communities and CSO experts as they tell us about the impact of PPPs.

Access the full report including all case studies at: www.eurodad.org/historyrePPPeated or on PSI's website through this link.

The report History RePPPeated: How Public Private Partnerships are failing will be launched at the World Bank/ IMF Annual Meetings 2018 in Bali Nusa Dua, Indonesia.