As members of UK PSI affiliate Public and Commercial Services Union (PCS) working at HM Revenue and Customs walk out of the closure-threatened Ealing office at noon on 20 March, PCS General Secretary Mark Serwotka will join them on the picket line. 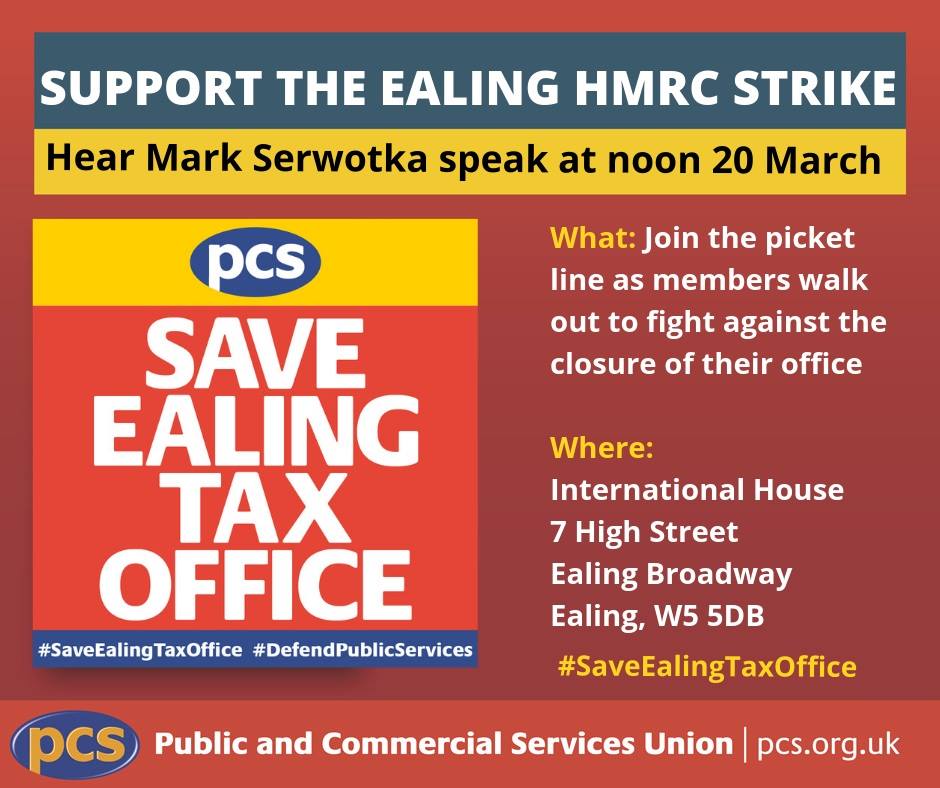 Mark will speak at the rally as the first HMRC-specific strike action for at least five years gets underway, supported by PCS members opposing the closure of their West London office.

Her Majesty's Revenue and Customs (HM Revenue and Customs or HMRC) is a non-ministerial department of the UK Government responsible, among others, for the administration and collection of direct taxes including Income Tax, Corporation Tax, Capital Gains Tax (CGT) and Inheritance Tax.

International House, in Ealing, could close as early as 2020, putting many staff at risk of redundancy.

More than 84% voted in favour of striking, and 95% backed action short of a strike on a 57% turnout in a ballot which ended on 12 March.

The branch is planning a series of strikes in March and April, and members will refuse to do non-contractual overtime from 20 March.

The following action is planned:

HMRC, which has already lost tens of thousands of years of tax experience as a direct result of its misnamed Building Our Future proposals, will see 90% of HMRC offices closed and replaced by fewer than 20 ‘regional centres and specialist sites’.

During the campaign, the union has held a number of well-attended meetings, organised demonstrations and distributed petitions. They have also secured political support for our campaign from the local MP Rupa Huq, Ealing council and the shadow chancellor John McDonnell.

PCS asks that messages of support be sent to RCGroup@pcs.org.uk and invites people to donate to the PCS Fighting Fund.