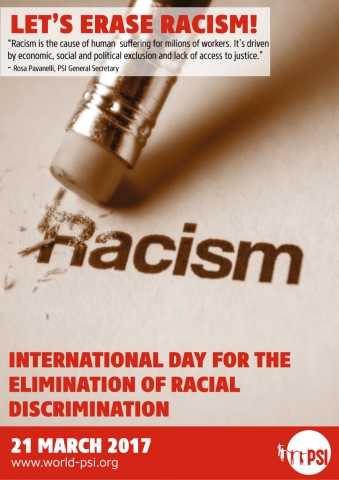 International Day for the Elimination of Racial Discrimination, 21 March 2017. “Racism is the cause of human suffering for millions of workers, driven by economic, social and political exclusion and lack of access to justice. Let’s end this vicious circle now!” says Rosa Pavanelli, PSI General Secretary.

“Racism is the cause of human suffering for millions of workers, driven by economic, social and political exclusion and lack of access to justice. Let’s end this vicious circle now!” says Rosa Pavanelli, PSI General Secretary.

The rights to equality and non-discrimination are cornerstones of human rights law. Yet in many parts of the world, discriminatory practices are still widespread, including racial, ethnic, religious and nationality-based profiling, and incitement to hatred.

“The fight against racism and racial discrimination is becoming even more important when populist governments use racial hatred and xenophobia as their campaign flags, talking about building walls when we should build bridges of solidarity, inclusion and equality. Now more than ever, trade unions must combat and eradicate these practices”, continues Pavanelli.

On this international day, we also remember all those who died as victims of the triangular slave trade that was the foundation of a global system of exploitation, and reflect on what we are doing inside our unions and communities to denounce and combat racism. The trade union movement needs to fulfil its social and political role, to combat an ideological polarization based on racial hatred, xenophobia towards migrants, religious radicalism and the idea of the supremacy of one race over others, leading to economic and social exclusion, assassinations and persecution. Increasingly, we see that refugees and migrants are targets of racial profiling and incitement to hatred.

At the same time, new grassroots movements are rising, such as #Blacklivesmatter in the USA, Canada and UK. A renewal of the global women’s movement can be noted opposing all forms of oppression, while millions have expressed solidarity with migrants and refugees in Europe, protesting right-wing policies.

Lorretta Johnson, Secretary-Treasurer of the American Federation of Teachers, says: “A new generation is standing up and delivering a fervent demand for racial justice. We must recognize that their fight is our fight and their struggle is our struggle.  Our work in racial equity will strengthen and propel our fight forward to defend the rights of all working people, including women, people of color, the disabled, ethnic minorities, immigrants, and members of the LGBTQ community.  We are confident that our unions’ efforts to fight inequity will help reclaim our nations’ promises of liberty and justice for all people.”

Agripina Hurtado Caicedo, Coordinator of the Inter-American Committee to Combat Racism, Xenophobia and All Related Forms of Discrimination and Intolerance, states: “Colombia occupies the third place in terms of inequality in Latin America due to racism, racial discrimination and injustice against vulnerable groups such as Afro-Colombians and indigenous people. Their economic dependence translates into fewer decent job opportunities and access to goods and services, which leads to exclusion and social marginalization. More than 60% are poor, one quarter live in poverty and 15% go hungry.

The average life of an Afro-descendant man is 6 years shorter than the national average, while a black woman can expect to live 11 years less than the national average. Fighting racism and racial discrimination in the world of work should be a cross-cutting issue on the agenda of trade unions, while ensuring that all groups are represented in both membership and leadership of our unions. Together we can put an end to racism!” 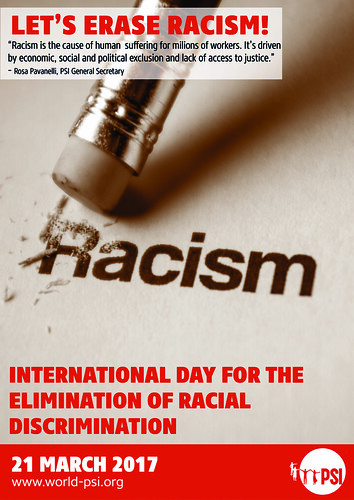 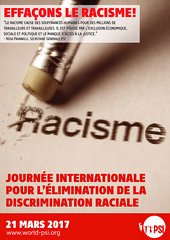 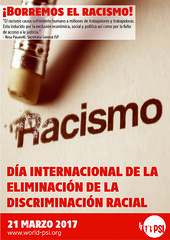