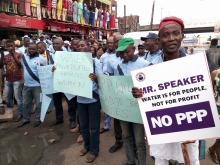 Civil society, community-based groups and unionists supported by Public Services International have petitioned the House of Assembly, asking it to step on the brakes on plans by the Lagos State government to embark on a Public Private Partnership (PPP) model of water privatisation.

In the petition titled "Privatisation is not solution to Lagos water problem" and presented to Hon. Obasa Mudashiru, Speaker, Lagos State House of Assembly, the groups said they were deeply worried that the Lagos State Water Corporation (LSWC), with the support of the World Bank and private water corporations, had been pushing very hard for a PPP model of water privatization that has failed in other parts of the world. The groups noted that despite the World Bank announced pull back from the project in December 2015 the Lagos government was still bent on pressing ahead with it.

They revealed that failures in water PPP models have been recorded across the globe where, as part owner of water corporations that win PPP contracts, the World Bank has positioned itself to profit from this model. They added also, that ”this conflict of interest drives the Bank’s misleading marketing, especially its promotion of key “success stories “ like Manila, Nagpur, Paris, and Dar Es Salaam that have attempted to solve water crisis with PPPs that failed and have instead rolled back water privatisation and advanced down the road of remunicipalisation".

ERA/FoEN Deputy Executive Director Akinbode Oluwafemi said: “We urge the Speaker and the entire members of the House to side with the people rather than promoters of privatization who put profits before the right to water which is upheld as a human right by the United Nations”.
Comrade Sani Baba, Sub-regional secretary of PSI said: “PPP promoters in the water sector advance arguments that are tailored to dousing apprehension of workers towards the initiative but time and again, and global experience shows that workers get laid off and rate hikes follow. The Lagos House of Assembly should reject this initiative because that is the path this PPP arrangement will follow”.
In the same vein, Comrade Abiodun Bakare, the state secretary AUPCTRE said: "The Lagos state government must of utmost priority ensure adequate funding for the water sector. This administration must also investigate funding that was expended on expansion of water infrastructure by the immediate past Group Managing Director of LSWC”.

The groups asked the Speaker to take the lead in putting the people first. Among the key demands, the groups urged decision-makers to stop any form of water privatization in Lagos, including PPPs that are based on a model that has failed to uphold the human right to water and has locked governments in long-term contracts and enslavement of their people.
This is further proven in facts that such deals have proven exceedingly difficult for cities to exit, despite rate hikes, service cutoffs, and unfulfilled infrastructure promises. They prevent cities from making crucial progress toward real solutions to water access challenges.
In the petition, the groups urged the Speaker to use his good office to lead Lagosians in developing real solutions that truly address people’s access to water from the prism of human rights. The Speaker was urged to ensure that the Lagos State Government: