The future of health in Africa 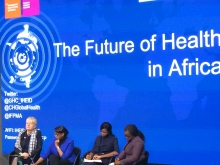 Over the last year, there have been renewed deliberations on what direction the pathways to health for all in Africa would take. The 1st World Health Organization Africa Forum held in Kigali, Rwanda on 27-28 June 2017 set the context, with the theme: “Putting People First: The Road to Universal Health Coverage in Africa”. The Geneva Graduate Institute encouraged further discussion with a panel discussion on “The Future of Health in Africa” on 23 January 2018.

This discourse continued on 8-9 March 2018, when governments and a broad range of non-state actors gathered once again in Kigali, Rwanda, for the Sustainable Development Goals Centre for Africa (SDGC/A) conference on regulatory frameworks for ensuring accountability in the health system.

Dr Belay Begashaw, the SDGCA director general, said in his welcome speech that “despite global declarations and goals, government commitments and pledges, calls, actions and targeted interventions, many health issues that are no longer issues in other countries continue to be huge issues in Africa.”

At the crux of this worrisome situation lies the dearth of much needed government action in funding health and providing adequate leadership for building resilient health systems. Ms Zouera Youssoufou, the chief executive of Dangote Foundation put this in perspective, saying “we know it is the responsibility of governments to fund healthcare, but unfortunately they have left the duty and responsibility to private sectors and donors.”

As WHO Afro noted in its 1st Forum last year, “equitable access to health care and prevention remains a distant goal in most countries” on the continent, even as the health challenges posed by “old enemies” such as HIV, tuberculosis and malaria are exacerbated by “new threats” such as non-communicable diseases (NCDs), urbanization and climate change. And despite gains made in maternal and child health, more than half of all preventable maternal deaths in the world occur in Africa.

A thread that continually runs through this new discourse on the parlous state of health in Africa and how to arrest the situation is the need for “home-grown” solutions. But, despite a consensus that governments must do more, the supposedly home-grown solutions are hinged on Public-Private Partnerships (PPPs).

The journey of a million miles might start with a single step. But not if this step is in the wrong direction. PPPs are part of the broad gamut of neoliberal policies and practices that arrested the development of Africa in its first few decades of independence. The primary aim of business, even in “partnerships” with governments, is to make profit.

The argument that African states do not have enough resources to provide universal public healthcare is on one hand ideological and on the other an argument which fails to put the problem within its proper context.

African heads of states and governments made a commitment to set aside at least 15% of their countries’ annual budgets for health in the Abuja Declaration of April 2001. Seventeen years later, less than 10% of African countries have acted on that commitment. These include Rwanda, which is not one of the wealthier countries. Meanwhile, elected public officials in Kenya and Nigeria are some of the highest paid in the world, yet they are failing to meet the Abuja Declaration targets.

The major problem is poor prioritisation of health by governments in real terms, rather than a lack of resources.

This context has two fundamental aspects: tightening of governments’ fiscal policy space, due to their implementation of international financial institutions dictates, and unjust (including, but not limited to, illicit) financial flows out of Africa, orchestrated by transnational corporations.

The crisis preparedness of already fragile health systems has been undermined because of the economic reforms advocated by the International Monetary Fund (IMF), which promote cuts in public health funding. This contributed significantly to the extent of devastation wrought by the 2014 Ebola outbreak in Guinea, Liberia and Sierra Leone.

The report of the African Union/United Nations Economic Commission for Africa High-Level Panel on Illicit Financial Flows, chaired by Thabo Mbeki, the former South African president, reveals that Africa has lost over $1 trillion to illicit financial flows over the last fifty years and continues to lose more than $500bn every year. A fraction of this amount is enough to guarantee universal access to quality public healthcare, without resorting to loans or support from philanthrocapitalist ventures.

For a future with health for all in Africa, we do not need partnerships that directly promote for-profit private interests or indirectly through philanthrocapitalist platforms, rather, governments should live up to their responsibility of providing adequate funding and an enabling environment for public health. Tax justice must also be promoted for domestic resource mobilisation.

PPPs might arguably appear to be a solution in the short run. It can take decades for the depths of their adverse impact on healthcare delivery to appear. Governments in countries like the United Kingdom which were early proponents of the PPP model in the 1980s, now criticize the costs of such private financing initiatives. But, as a report of the Jubilee Debt Campaign at the end of last year reveals, they continue to promote this failed model in Africa and other parts of the developing world.

However, in a stunning concurrence with the fact that “Public Private Partnerships suffer from widespread shortcomings and limited benefits,” the European Court of Auditors recently stated that “EU co-financed Public Private Partnerships (PPPs) cannot be regarded as an economically viable option for delivering public infrastructure.” There can hardly be any more damning assertion for PPPs to be rejected in conceptualising a meaningful future for health in Africa.

On the contrary, policy-makers can draw inspiration from a new study published in the British Medical Journal in March 2018. It shows, with a seven-year proactive community case management (ProCCM) pilot intervention, that; expanding “free healthcare to everyone” is both possible (even in one of the poorest countries in Africa), and necessary for achieving significant improvement in health outcomes.

Health is a fundamental human right and can be so realised only as universal public healthcare, where children, women and men do not die because they cannot afford quality healthcare or go bankrupt to meet health expenses.

The neoliberal model of maldevelopment which prioritises profit over people should be jettisoned for a social model of sustainable development with people at its centre. PSI and its affiliates in Africa and around the world are committed to this. We will continue to mobilise for this pathway to a better future. Our health is not for sale.

This article is an extract from the “Right to Health” newsletter issue 04 (April/May 2018). Subscribe to the newsletter. Send us your stories.