The fightback against austerity... The stories continue

Greece: the fightback against austerity 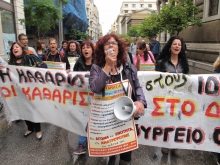 PSI is deeply concerned about the continued attacks against public services and the austerity measures taken in Greece. We have heard that the Greek government plans to lay off some 6.500 public sector workers by the end of the year, in line with the Troika’s demands.

In November 2013, PSI, the European Federation of Public Service Unions (EPSU), together with our affiliate unions, ADEDY, and allies in Greece brought together a team of expert union journalists and communicators to learn more about the issues facing Greek trade unionists and share this understanding with their union members and communities around the world.

PSI has been closely monitoring the situation in Greece and has produced a video compiling the interviews with the public sector workers and unions including interviews with healthcare workers, tax workers, and representatives of the Athens water union (EYDAP).

The Greek government has made a range of painful cuts to salaries, pensions and jobs for public workers over the last four years, saying they were needed to satisfy the demands of the international creditors that bailed the country out. But the Greeks hurt by those steps, and the nation’s courts, have a different idea. Steadily, citizens groups — including police officers, university professors, cleaning workers and judges themselves — have challenged the cuts as illegal or unconstitutional. And in case after case, Greek courts have agreed.

The privatization of the Greek water companies in Athens and Thessaloniki has been frozen. This was the news reported to the General Assembly of the Thessaloniki water company (EYATH) on 30 June. Workers representatives cheered the report that the ongoing privatisation of the public company is in direct conflict with a decision of the Council of State which had decreed that the privatization of the Athens water company sought by the Greek government and welcomed by Eurozone President and Dutch Finance minister Dijsselbloem was illegal. The workers, their union and a broad coalition of social movements had already successfully organized a referendum in which 98% of votes cast of nearly 220.000 people said No to the privatization, 18 May 2014.

In a letter to Greek affiliate ADEDY, PSI expressed full support for the one-day nationwide strike on 9th July 2014 and the protest against the government’s plans to sell off part of the Public Power Corporation (PPC) to private investors.