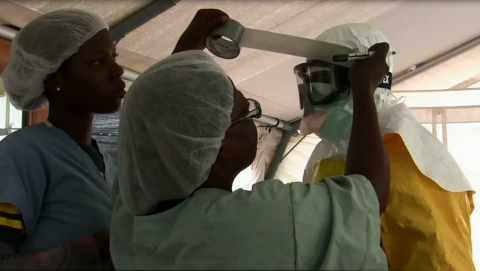 In an exclusive video produced by PSI, hosted and shared by The Guardian, Liberian healthcare workers share their difficulties and frustrations with the working conditions in the fight against the Ebola Virus Disease.

“Working at the Ebola Treatment Unit is not an easy task. It’s hectic, it’s worrisome. Most of the time we’re afraid of being contaminated or infected, even though we are protected. Sometimes we even call Ebola ‘Evangelist’ because we pray in the morning when we dress and before going in we pray again.”

Ruth Haddad Johnson is a Liberian healthcare worker in the frontline against the Ebola Virus Disease (EVD). Liberian health workers are not only risking their lives they are being denied basic human and trade union rights, as it remains illegal for public sector workers to join trade unions in Liberia.

In this video, Ruth and other healthcare workers, share the difficulties that they face every day caring for Ebola patients. They also share the frustrations with their working conditions, with the lack of regular and adequate payment, and compensation to the families of the deceased.

“We are risking our lives but we are seeing nothing forthcoming. If anyone should die, then your family might say: oh even though we miss our relative, we got something to hold on for some time”, she says.

Up to December 2014, more than 600 healthcare workers have been infected with EVD in West Africa. Nearly 350 have died due to lack of proper equipment and protection. PSI has produced a first video naming and honouring the healthcare workers killed by Ebola, victims of corporate interests and social injustice.

“In the fight against Ebola, it is not only health workers who are at the Ebola Treatment Unit, that are facing risks. In fact, those outside the treatment units are more at risk, because there isn’t sufficient training and there isn’t sufficient equipment,” explains George Poe Williams, general secretary of the National Health Workers Association of Liberia (NAHWAL).

PSI and the local health sector unions have been calling for months for appropriate prevention and control measures.

Beyond the “technical” and “logistical” response to EVD a long-term political problem persists: lack of decent working conditions, of labour rights, of universal coverage, let alone when confronting a major health disaster.

“Health workers must have the tools to do their jobs. Too many people are dying because of unsafe working conditions, this is criminal neglect,” warns Rosa Pavanelli, General Secretary of PSI.

Under the slogan “Safe workers save lives”, PSI is lobbying national governments, regional organisations and donors to change the direction of the dominant model of health system development, so that these countries build public infrastructure to deliver universal health coverage and adequate social protection systems.