Answering the challenge of water supply in Jakarta 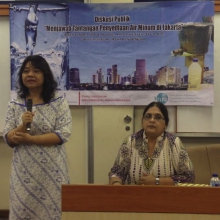 The national symposium entitled “Answering the challenge of water supply in Jakarta” was held on 4 September 2014 in Al Azhar University in Jakarta, Indonesia. The event was organised by the student executive body of the Law Faculty of Al Azhar University and was attended by 147 participants including students from six universities in Jakarta.

V. Lakshmi, PSI Asia-Pacific regional secretary, delivered opening remarks emphasising that water is a human right. She insisted that it is the government’s responsibility to ensure that people can enjoy "sufficient, safe, accessible and affordable water, without discrimination".  She explained that this will require a new commitment to public water and sanitation utilities. The 30 year experiment with privatisation has largely failed. PSI and its affiliated unions around the world are strongly resisting the privatisation agenda.

Preceding the event, there was a rather intense incident. Palyja, one of Jakarta’s private operators, invited the student body to their office and made enquiries about the symposium. They also stated that they will not sit at the same table as PSI. Furthermore, the head of the institutions, invited as speakers, did not attend and sent non-decision makers to replace them. Jakarta’s provincial office did not even bother to attend. The organising committee stated their disappointment to the persons representing the institutions.

Regarding the management of Jakarta’s water, the speaker from the Ministry of Public Works stated that they will respect the central Jakarta court’s decision regarding the citizen lawsuit against Jakarta water privatisation. However, his department also believes that the issue is not that water is managed by private operators or public utilities but that customers can obtain affordable water. His department also believes that the move to purchase Palyja’s shares through Jakarta Propertindo (Jakpro) is a smart strategy.

The speaker from PAM Jaya explained why the water services in Jakarta were performing poorly, for example, due to high unaccounted-for water (UFW) and low bulk water. The speaker from PAM Jaya made it clear that they do not want to suffer losses caused by privatisation. However, all decisions should be taken carefully in order to minimise consequences.

Emanuele Lobina presented three options to Jakarta water management. The first was to continue privatisation, the second was re-privatisation (share repurchase through Jakpro), and the third was to bring back the water services through PAM Jaya. He stated that the most realistic option is water services management by PAM Jaya.