At Annual Congress, KPTU Looks towards the Future

On 22 February, delegates of the Korean Public Service and Transport Workers’ Union (KPTU) from around the country gathered at the Kim Koo Museum & Library in Seoul for the union’s annual Congress. KPTU delegates were joined by several guests, including representatives of the Korean Confederation of Trade Unions (KCTU) and allied public sector unions.

This year’s Congress was held under very different circumstances than those we faced a year ago. Last year, we were contending with a massive crackdown on the labour movement. This year, we face the real possibility of an early change in government and the opening of new social space as a result of the mass candlelight protests and the impeachment of President Park Geun-hye.

During the Congress, therefore, KPTU delegates looked forward toward a new period in which we will be able to move from defensive battles against union repression to offensive campaigns for a more democratic and equal society. 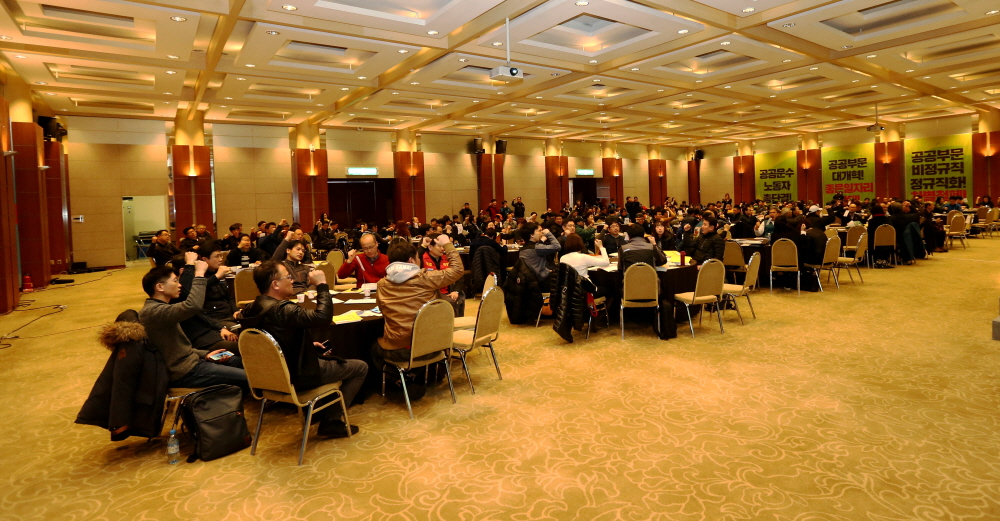 In particular, the KPTU delegates passed a plan to using an early presidential election (expected in May) to put forth a concrete platform for democratic and people-centred reform of public institutions, the creation of good public sector jobs, strengthening of road and transport safety and the expansion of trade union rights. KPTU will seek policy agreements with opposition party candidates committing them to these demands, while continuing to work towards the long-term goal of the creation of a progressive political party.

We are aware, moreover, that a mere transition in ruling party will by no means guarantee social change. Rather, continued protest is needed to call on the next administration live up to the most progressive meaning of the candlelight protests. As a main part of this effort, KPTU delegates agreed to prepare for strike action for a 10 thousand won minimum wage and the complete withdrawal of the Park government’s public sector and labour policies, timed for directly after the presidential election.

KPTU delegates also agreed to make active use of the new social environment to build union strength through organising and long-term planning. In particular, Congress committed to deeper investment in strategic organising of precarious workers, the establishment of a union education centre and the operation of a Future Strategies Committee to enable us to adapt to a changing domestic and global context. In addition, Congress voted for an incremental increase in dues, and in particular to develop a plan for centering increases on higher income members.

In the midst of a world reeling from the rise of right-wing nationalism and intensified international conflict, Korean workers have the opportunity to move in a different direction, toward a society that is more democratic, more equal and more inclusive. This is a tremendous responsibility, one that we cannot take on alone. In this historic movement, we will seek new forms of international exchange and solidarity as we work to bring about real progressive change in Korean and find collective solutions to the new global challenges we all face.