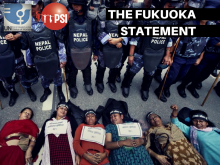 Around 70 women representing 22 countries from PSI's Asia Pacific region will launch, during APRECON in Japan, what is being called the "Fukuoka Statement". With the slogan “Unions at the core of women’s economic empowerment in the changing world of work”, the document will serve as a roadmap towards the UNCSW61.

PSI and other trade unions take part in the United Nations Commission on the Status of Women (UNCSW) every year. The UNCSW provides a unique opportunity for coalition-building with other progressive organizations and to influence global policies on gender equality. The UNCSW is instrumental in promoting women’s rights, documenting the reality of women’s lives throughout the world, and shaping global standards on gender equality and the empowerment of women.

In 2017, the main theme of UNCSW61 will be women’s economic empowerment in the changing world of work. It will be an important platform for the trade union movement to raise its demands and put women’s labour rights at the centre of the debate. Campaign activities aimed at influencing the outcome of UNCSW61 will be launched on 9 October and run until March 2017.

The “Fukuoka Statement” will be presented at 15:45 at ACROS Fukuoka Conference Centre by 70 women leaders from the region. With the slogan “Unions at the core of women’s economic empowerment in the changing world of work”, the statement will serve as a roadmap towards UNCSW61. On the same day, Sunday, 9 October, from 17:00 to 18:00, there will be a rally near ACROS Fukuoka.

The role of trade unions in defending women’s rights at the workplace and in society is now clearer than ever. PSI and its allies will actively continue to work towards their goal of equality and social justice.

These are the main points the “Fukuoka Statement” will address: