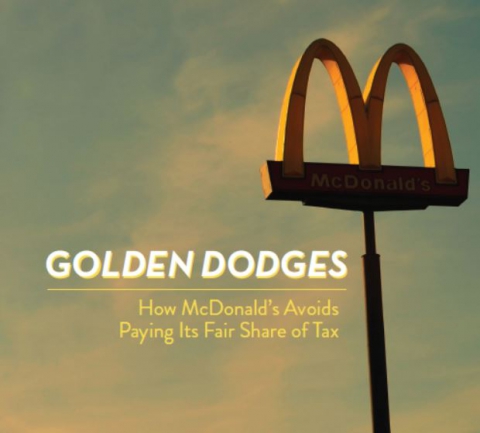 McDonald’s appears to have taken advantage of corporate tax loopholes to avoid paying up to US $1.8 Billion in tax between 2009 and 2013 including 1 billion Euros in Europe and AU $497 million in Australia.

The report Golden Dodges: How McDonald’s Avoids Paying its Fair Share of Tax, released today by a coalition of global trade unions reveals that McDonald’s is using aggressive strategies to avoid paying tax in some of its largest markets.

McDonald’s is not only the world’s largest fast food company but it is also the world’s largest franchiser. In 2014, it had US 87.8 billion in system-wide sales, nearly twice the sales of its largest competitor. The report outlines the way McDonald’s uses its franchising model to generate much of its revenue through royalty payments from franchisees rather than through direct operations of stores. Much of the royalty payments are then passed through to offshore tax subsidiaries in tax havens.

McDonald’s has large cash holdings in tax havens including over $US 1.9 billion in the tiny state of Luxembourg.

The report shows that across the world McDonald’s is attracting the attention of tax authorities with investigations in at least six countries since 2005 and with the European Union only this year reportedly investigating  tax arrangements in Luxembourg.

In the report, global unions call for governments around the world to investigate McDonald’s tax arrangements and share information between countries. They also call for more investment in human capital in tax agencies to give regulators the necessary resources to recover unpaid corporate tax.

Interest in the extensive tax avoidance practices of multinational companies is growing as corporate tax scandals unfold. Recently, an Independent Commission on Reform of International Corporate Taxation was established with prominent figures such as Joseph Stiglitz and Jose Ocampo to recommend changes to the global tax system.

“There is no excuse for governments to cut public services like health and education when they let companies like McDonald’s shift billions of dollars in taxes offshore”, Public Service International  General Secretary, Rosa Pavanelli said today.

“With inequality rising, working people will no longer accept cuts to services when politicians allow scandalous levels of tax avoidance by the wealthiest on the planet,” she said.

“Companies such as McDonald’s are mocking their workforce when they argue low wages are needed to be competitive, but cream off billions in profits in tax havens,” said Ron Oswald, IUF General Secretary.

“Everyone benefits when companies pay tax where they make the profits,” he said.

McDonald’s restructured its business affairs in 2009, after a tax policy change in Luxembourg allowed companies to benefit from significant reductions in tax rate earned from intellectual property. It established a Luxembourg- resident intellectual property holding company with a Swiss branch and shifted its headquarters from London to Geneva.

Between 2009 and 2013, the Luxembourg-based structure, which employs 13 people, registered a cumulative revenue of €3.7 billion, on which it reported a meager €16 million in tax.

McDonald’s tax avoidance strategies are part of a broader trend. Since 2005, corporate tax as a proportion of GDP has dropped by 17% in OECD countries while most simultaneously struggle with budget crises.