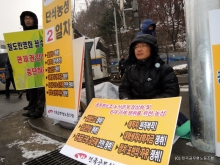 Update 19 February: On 25th February the new Korean President Park Guenhye will take office. Let’s make sure that she will not forget this day! Visit the Korean embassy in your country and promote our Labour Start Campaign among your members! Read more

Kim Jungnam is protesting the dismissal of 137 workers, among them the KGEU General Secretary and President. The workers were all dismissed for their trade union activities.

In a recent rally on 19 January, attended by over a thousand KGEU officials, the union called once more on the President-elect and the presidential transition committee for a normalisation of labour relations in the government sector, improvement of working conditions, and freedom of association and trade union rights.

So far, the presidential transition committee has not shown any will or reaction to solve this situation. On 30 January, 16 days into the hunger strike, KGEU president Kim Jungnam collapsed and was taken to hospital. PSI has been informed that he is still in hospital resting and his health is improving. KGEU Vice-Presidents have taken up the hunger strike.

On 31 January, the KGEU held a press conference on the campaign and international solidarity and submitted more than 8,000 protest letters signed through the Labourstart campaign to the government. PSI General Secretary, Rosa Pavanelli, sent a video message of support and solidarity.

In parallel, the KGEU and Korean Public Services and Transportation Workers' Union (KPTU) are organising petitions to urge the Korean government to reinstate all dismissed public sector workers in relation of legitimate union activities.

PSI fully supports its affiliates' demands and has written letters of protest to President-elect Park Guenhye calling on her to respect ILO core labour standards including the fundamental right of freedom of association, to reinstate the dismissed workers and recognise the KGEU.

PSI also asks its affiliates to send letters of protest and solidarity through the Labourstart campaign.

History of KGEU
LABOURSTART
Send a letter of protest on Labourstart