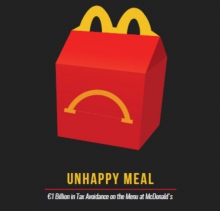 This report is the product of a coalition of European and American trade unions, representing more than 15 million workers in different sectors of the economy in 40 countries, and War on Want, the U.K.-based anti-poverty campaign group. The members of the coalition work towards an economy built on decent jobs and a fair, progressive tax system at the global, E.U., and national levels. It is the first time that we have joined forces to highlight an example of corporate tax avoidance, a critical issue a¬ecting the future of democracy and the welfare state.

Almost everyone knows someone who works or has worked in one of McDonald’s 7,850 European stores. While McDonald’s portrays itself as a vital provider of jobs, particularly for youth, its workers o‑en experience precarious, low-wage work with little prospect for steady employment or advancement. In the U.K., for instance, the vast majority of McDonald’s 97,000 workers are on zero-hours contracts – employment contracts with neither guaranteed hours nor work schedule stability.

While McDonald’s poor working conditions are well-known, this report is the first to shed light on the company’s tax record. It relies on primary data drawn from the financial accounts of the company and its subsidiaries as well as press and research reports. While transnational corporations like McDonald’s are avoiding taxes in Europe, public sector workers are having their wages slashed, and nurses and social carers are facing layo­s. In fact, more than 56,000 tax inspectors have been cut throughout the E.U. at precisely the moment they are most needed to investigate companies like McDonald’s. This report provides further ammunition to encourage governments, parliaments, and the European Commission to shine a light on these practices, hold corporate tax avoiders accountable, and begin a real democratic dialogue that results in deep reforms and restores confidence in a fair, progressive, transparent, and effective tax system.

Since 2005, Change to Win has advocated on behalf of workers and the general public for consumer protections, healthcare access, tax fairness, and other safeguards to rebuild the middle class. We are grateful to the team of researchers at Change to Win for compiling these data and hope this report will help put tax justice on the menu at McDonald’s.