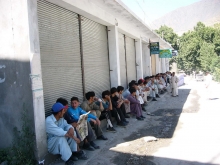 Nearly 75 million youth are unemployed around the world, an increase of more than 4 million since 2007, according to a new report from the ILO.

Gains in employment rates for young people have been wiped out by the economic crisis. According to the ILO's Global Employment Trends for Youth 2012,
it may take 4-5 years before jobs rebound. In the meantime, many of the 75 million unemployed young people will completely give up looking for work.

In the Developed Economies & European Union, as well as in South Asia, little progress has been made in rolling back the impact of the global economic
crisis.

In North Africa, the youth unemployment rate has increased sharply following the Arab Spring, rising by almost 5 percentage points between 2010
and 2011 and adding to an already very high level of youth unemployment in this region as well as the Middle East.

Even in East Asia, the youth unemployment rate in 2011 was 2.8 times higher than the adult rate. Apart from the immediate negative economic and social effects of high youth unemployment, it is important to consider its detrimentaleffects on future employability and wages.

Remain students
Discouraged by high youth unemployment rates, many young people have given up the job search altogether, or decided to postpone it and continue their
stay in the education system.

The crisis-induced withdrawal from the labour force amounts to 6.4 million young people worldwide. Pressure on young job seekers will mount further when those young people that have been delaying their entry into the labour market will return to activity, and start searching for work.

Temporary employment and part-time work
Many youth are trapped in low-productivity, temporary or other types of work that fall short of their aspirations and that often do not open opportunities to move to
more permanent, higher-productivity and better-paid positions.

In developed economies, youth are increasingly employed in non-standard jobs and the transition to decent work continues to be postponed. The growth of temporary employment and part-time work in the past decade, in particular since the global economic crisis suggests that this work is increasingly taken up because it is the only option available.

Projections
Projections for 2012–2016 suggest little improvement in youth labour markets. By 2016, the youth unemployment rate is projected to remain at the same high level, according to the ILO report.

From May 23 to 25 the ILO holds a Global Youth Employment Forum in Geneva.