What is the point of development if social progress is not made? 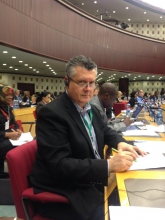 The Third International Conference on Financing for Development (FFD3) held in Addis Ababa is taking place at a challenging time.The world economy is still struggling to recover fully from the global financial and economic crisis that erupted in 2008.

PSI, together with other trade unions and civil society partners, is taking an active part in the Post-2015 Development Agenda including participating in the Third International Conference on Financing for Development (FFD3) held in Addis Ababa, Ethiopia, 13-16 July.

PSI Regional Secretary for the Inter-american region, Jocelio Drummond represented PSI in the round table on trade: Round table 4: Ensuring policy coherence and an enabling environment at all levels for sustainable development.

“The current state of the global trade regime reflects the power imbalances between the most and least developed countries. Disputes about food security continue to threaten the developing world’s attempts to alleviate hunger as barriers to trade without sufficient regard for legitimate policy objectives.

Treating the policy solutions required by developing countries the same as those for developed countries undermines the long established principle of common but differential treatment and risks further enshrining deep inequality.

The current draft text of the Addis Ababa Accord does little to address these factors and hence misses an important opportunity to encourage development of the world’s least developed economies through a sustainable and just trade regime.

Common but differential treatment as a principle must be a cornerstone for the global trade regime.

The most developed countries in the world seem to have forgotten that in the early years of their industrialisation they maintained barriers to foster fledgling industries and they used state intervention to drive industrial policy.

Furthermore the key drivers of economic growth in developing countries are often provided by public sector investment. Educating and maintaining a healthy workforce, investments in infrastructure and supporting strong public institutions are all critical elements to foster economic growth in developing nations. All require strong public investment.  Therefore developing nations require access to all possible regulatory and policy instruments. These are the very aspects of domestic policy space that the current WTO Plus agreements attempt to restrict.

Analysis of the most recent leaks of the Trade In Services Agreement text show that there are almost no differentiated obligations for developing nations. The modest but significant gains under GATS for development are being stripped out in secret negotiations.

Rigorous cost benefit analysis must be undertaken, using realistic assumptions, before developing countries decide to (or are pressured to) pursue trade agreements on the presumption that such agreements will support economic development. Further, social policies are legitimate goals for developing nations. What is the point of development if social progress is not made?

Finally we call on governments to review investor state dispute resolution clauses. Such clauses give foreign investors rights that local business does not have. These clauses create powerful rights for foreign corporations to intervene in the domestic policies of developing nations without regard for the development interests of the countries nor the imbalance of power between these corporations and developing nations."