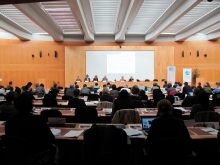 From education to transport, from finance to health. The new Trade In Services Agreement (TISA) is posing serious threats to quality standards in various public sectors that affect the lives of citizens.

This is what has emerged from the first Global Trade in Services Forum, in Geneva on 17th October 2014, co-organised by Public Services International (PSI), Friedrich-Ebert-Stiftung (FES) and Our World Is Not For Sale (OWINFS) network.

Leading experts and over 140 representatives from trade unions, civil society and governments, expressed their concerns about the new trade agreement, which is being negotiated in secrecy by a small group of governments and supported by a coalition of corporations.

“The secrecy of these trade agreements neglects any democratic participation” says Jane Kelsey, professor of law at the university of Auckland, New Zealand.

“Services are fundamental to people's daily lives, and what we see in these agreements is an attempt to turn them into commercial products, in ways that benefit just the biggest companies in the world.”

According to Herta Däubler-Gmelin, former Minister of Justice of Germany, trade agreements should be discussed by national parliaments and within the European Parliament in full transparency, or they will just foster protest and not deliver the results their supporters keep promising.

In the United States, “the industry and trade lobbies represent the lion's share in the trade advisory committee, reaching 85 per cent of the total members” revealed Celeste Drake, trade and globalisation policy specialist at AFL-CIO.

The forum represented a unique opportunity to examine the negative impact of TISA and the darkest side of its privatisation and deregulation agenda, but also to start and elaborate alternatives and solutions to the ongoing process.

“The interest and participation in the forum reflects the growing concern about these secret talks,” says Daniel Bertossa, Director of Policy and Governance at PSI.

“It's clear from today that trade unionists and civil society are angry about what is being negotiated in their name.”