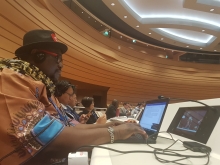 Public Services International brought the voice of the world’s public sector workers to the 107th session of the International Labour Conference today, as the ILO’s flagship conference opened its doors.

"The Standard Setting Committee: violence and harassment in the world of work" at work saw heated debate, with employers and some governments expected to oppose attempts by unions to push for an International Convention on the subject. Speaking to the Committee, PSI’s Verónica Montúfar explained how:

The trade union federations welcome this moment of discussion on potential ILO instruments such as a Convention and Recommendation on violence and harassment in the world of work, which has been the result of a long effort.

Violence and harassment affect all sectors and workers which global union federations represent - however some sectors are more vulnerable to different forms of violence.

For example, within IUF’s affiliates, two clear examples are the hotel sector and the agricultural sector where workers are exposed to specific types of gender violence.

For Public Services International, it is important to make clear that States are also employers, and therefore public employers need to be included in any proposed instrument.

Several sectors of public service workers face specific challenges such as those in the health sector, who can face violence at work not only from intensive work regimes, but also from third parties (such as patients and their relatives). Emergency workers face exposure to stress, disaster and human tragedy. In other sectors such as Public Administration, Justice and Tax departments, cases of violence and harassment are often the result of the sensitivity nature of their work.

For public workers, it is essential that the instrument highlights the importance of freedom of association and collective bargaining and promotes fundamental Conventions such as 87 and 98; at well as also those specific to public administration, such as 151 and 154.

The importance of social dialogue as a mechanism for expanding social justice in the world of work and consequently ethos and practice of democracy in a general sense, cannot be overemphasized. As the representative global union federation of over twenty million working women and men in the public services across 154 countries and territories, PSI and its affiliates appreciate social dialogue as the foundation of respect for the trade union rights of working people, as it ensures effective industrial rule-setting and decision-making.

Thus, all obstacles to social dialogue should be removed by Member States. This obviously requires labour reforms as envisaged in the report of the International Labour Office to this committee. There is equally the need for the defence of the Right to Collective Bargaining for all workers.

It is equally worrisome that public sector workers in a number of countries continue to be denied their full right to organise. We are glad that in recent times union campaigning has led to countries such as Liberia and Philippines taking apparent positive steps forward. The International Labour Office should support and help to hasten the needed introduction of social dialogue in the public sector in all countries.

Increasing informalisation of work has, amongst other things, resulted in precarious work even within the formal sector, and regrettably via outsourcing and contracting staffing, in the public services of many countries. Precarious workers in the informal economy as well as in the formal sector tend to be denied access to social dialogue.

There are however positive examples of creatively instituting social dialogue won by informal workers. An example of this is with the establishment of bargaining relations between the municipalities and waste pickers in some states in India. The right to organise and collective bargaining is necessary for genuine social dialogue to be practiced within tripartite, and in the context of workers in the public services, bi-partite frameworks.

The changing world of work requires that this right be upheld by ILO Member States, to ensure more social justice, and for the achievement of inclusive, sustainable development. PSI thus urges urgent action in this regard.

We wish to express our solidarity with the UN staff unions and deeply regret the unilateral pay cut applied to the staff of UN organizations. As the ILO approaches its centenary, it is time its workers are also given fundamental trade union and workers’ rights such as collective bargaining across the UN system