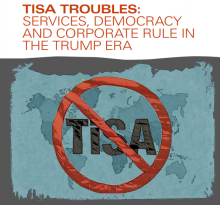 A new study, co-published by the Rosa Luxemburg Foundation and Canadian Center for Policy Alternatives, examines the adverse impacts on public services and public interest regulation of the Trade in Services Agreement (TiSA), quietly being negotiated in Geneva by a group of 23 governments

Senior CCPA trade researcher Scott Sinclair argues that under the guise of expanding international trade in services, TiSA will make it much harder for governments to regulate vital services such as energy, water, banking, transport and online services. The agreement is also designed to pry open public services to commercial involvement. While this agenda may suit the commercial interests of the transnational corporations behind the secretive TiSA negotiations, it will not serve the broader public interest.

Looking ahead, the report considers three possible futures for TiSA:

1) the U.S. withdraws from the agreement and the talks collapse or are suspended indefinitely;

2) the U.S. pulls out of the talks, but other parties continue under the leadership of the EU; and

3) the U.S. recommits to TiSA with a renewed, even more aggressive negotiating mandate.

The third scenario is clearly the most dangerous. But whatever happens, the TiSA’s deregulatory agenda and problematic elements will likely resurface in other negotiating forums and impending trade deals, including the new wave of bilateral deals championed by the Trump regime.