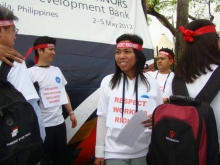 Members of the Global Union Federations (GUFs) led a silent protest Friday at the opening of the Governors’ Annual Meeting of the Asian Development Bank (ADB) against the financial institution’s continued inaction to their calls to protect and promote workers’ rights in all its projects.

Wearing head bands and carrying placards with messages such as “ADB: Respect workers’ rights”, “ADB, promote pro-poor, pro-worker growth” and “Fight poverty, protect our dignity”, around 70 GUF delegates silently trooped in front of the Philippine International Convention Centre (PICC) just as the Governors’ Annual Meeting was about to start. The meeting is part of the ADB’s 45th Annual Meeting on May 2 to 5 in Manila.

The GUF delegates, coming from India, Indonesia, Singapore, Mongolia, Malaysia, New Zealand, Indonesia, Sri Lanka, Tonga, Nepal, Japan, Philippines and Cambodia, said this is their peaceful way of urging the ADB to “walk the talk” when it comes to the interests of the organized labor sector.

“We dare the ADB to walk the talk. Be a responsible institution by putting forward pro-worker policies in its projectsfrom design down to implementation,” said Mahendra Sharma, Regional Secretary of the International Transport Federation (ITF), Friday.

But tension grew when police security personnel deployed at the PICC barred the GUF delegation to participate in the opening of the Governors’ Meeting. As of press time, the trade union leaders are still negotiating to be allowed to take part and send their messages.

The GUFs since 2005 have been engaging the ADB during its annual meetings to:

Apolinar Tolentino, Regional Representative of the Building and Wood Workers International (BWI), said the ILO Core Labour Standards, an internationally accepted series of rules and principles on minimum standards for treating workers humanely, would help ensure full protection of workers in ADB-funded projects. “We tell ADB: Be a responsible organisation. Without the ILO Core Labour Standards, thousands of workers in ADB sites worldwide would remain vulnerable to work place abuse and exploitation.”

The “institutional partnership” with trade union organizations meanwhile will ensure ADB’s accountability in all its actions, said Lakshmi Vaidhiyanathan, Regional Secretary of the Public Services International.

On the GUFs’ demand for ADB to review its loans and grants to member states, PSI Vice President Annie Geron said: “Many member states use ADB funds to privatize state utilities such as power and water. Workers and their families usually bear the brunt of high costs of utilities once privatized.”

The GUF delegation during the CSO meeting with ADB Senior Staff led by ADB President Haruhiko Kurodaon May 2 has urged the bank to push for “institutional arrangements for technical assistance on research and capacity building”, a recommendation which, according to Kuroda himself, was “quite relevant.”

The GUF delegation, which also took part in the Labor Day protests here, said it is yet to see tangible results from ADB when it comes to workers’ concerns.

The GUFs are international trade union organizations representing about 70 million workers across the globe in the public sector, building and construction, services, and transport sectors. They are comprised of the PSI, BWI, the Union Network International (UNI) and the International Transport Federation (ITF).