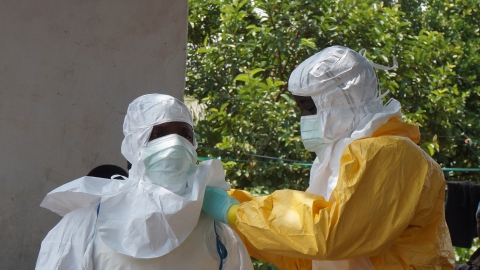 At the international G20 Nursing Conference in Brisbane, officials from nurses' and midwives' unions joined Ebola health workers on the front line in Liberia.

On Thursday 13 November, the Queensland Nurses’ Union (QNU) hosted an International G20 Nursing Conference at their Brisbane headquarters, including a live exchange with health workers fighting Ebola in Monrovia, Liberia.

Liberian nurse Laurene Wisseh and ambulance officer Gorden Kamara, who operate one of 15 ambulances servicing the country’s 1.5 million residents, spoke with Australian and international nurses and union officials to call on world leaders in Brisbane for G20 to provide increased protections for health workers now.

QNU Secretary Beth Mohle said those fighting Ebola in the severely under resourced region had woefully inadequate personal protective equipment and support - and voluntarily isolated themselves from loved ones to reduce the risk of infection.

“We applaud recent efforts to establish additional facilities in West Africa but must stress local health workers continue to die at a rapid rate because they don’t have protective equipment or logistical support to transport these supplies.”

Monrovian ambulance officer Gordon Kamara backed the call: “I have not seen my family or children for six months because I fear infection.”

“Every day we pick up Ebola patients and take them to the clinic and sometimes we are forced to return them to their homes to die. The risks are very great yet the fight must continue,’’ said Mr Kamara.

PSI Director of Policy, Daniel Bertossa, said a recent global survey of health workers fighting Ebola found the most common response was that they had no access to basic protective equipment.”

According to Mr Bertossa the Ebola outbreak was directly linked to poor investment in public sector health systems in West Africa, and the axing of international aid to developing nations.

“There is a clear link between the outbreak of Ebola Virus Disease, poor investment in public sector health systems in West Africa and austerity measures imposed in Europe,’’ he said.

PSI has appealed for contributions to an international fund to assist the families of workers who have died because of the contagion.
For more information see: www.world-psi.org/en/EbolaAidFund.

Co-President of National Nurses United (NNU), Deborah Burger, said today marked a national day of action for American nurses with more than 22,000 hospital staff expected to strike due to concerns about substandard PPE and Ebola protocol.

“This crisis highlights the importance of public health services around the world and the very real need to protect those provided under Medicare from threats such as the Abbott government’s proposed $7 GP co-payment,” he explained.

On November 5, Mr Abbott announced the introduction of “price signals in the health system’’ which would form an integral part of his G20 pledge this week.

The Abbott government’s proposed co-payment for access to a General Practioner (GP) and basic medical attention could end Medicare and universal health care in Australia. The NSWNMA is advocating for the implementation of a Robin Hood tax or levy of between 0.005 and 0.05 per cent on the trading of financial instruments such as stocks, bonds, derivatives, futures, options and credit default swaps.

Mr Holmes said that the Financial Transactions Tax would not significantly impact the savings of ordinary Australians or everyday consumer activity such as paying bills online or using ATMs. Instead, the levy would target finance companies engaging in financial transactions at high speed and frequency.