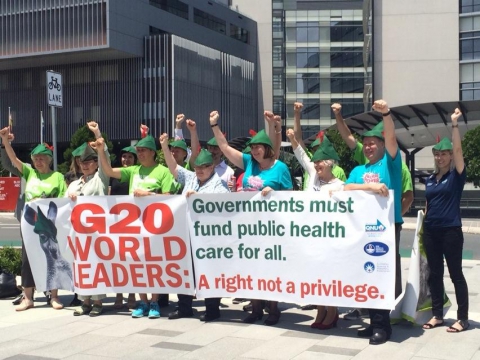 Public healthcare is more efficient than private healthcare, reveals a new study by Public Services International (PSI), which was released during an international trade union forum on public health, ahead of the G20 in Australia.

“After almost thirty years of privatisation in the healthcare sector the evidence shows that claims of private sector efficiency are a dangerous myth,” said Daniel Bertossa, Director of Policy at PSI.

Mr Bertossa explained that the reasons for the efficiency and effectiveness of the public provision of health are not complex.

“Administrative costs are routinely and dramatically lower due to economies of scale and public systems are better able to control costs by controlling over-servicing and ensuring the most appropriate form of treatment” he said.

Several studies show that the incentive structure in private systems distort the types of treatments provided towards those that are more profitable for the provider even where they are less appropriate and more costly.

Private providers also pay more to borrow, defying the cliché that they bring more and cheaper financing to healthcare.

Tragically, the effects of out-of-pocket costs cause untold hardship. Surveys in 89 countries, both high and low income, covering 89% of the world’s population suggest that 150 million people globally suffer financial ruin annually because they have to pay for health services.

Attempts to supplement public systems with private providers fared no better. The ensuing two-tiered system tends to starve the public system and slide towards the inefficiencies of a substantially private system.

Mr Bertossa is in Australia to call on the G20 Leaders to meet their promise to stop multinational corporations from dodging hundreds of billions of dollars each year.

“If multinational companies paid their fair share in tax we could easily fund quality public healthcare for all,” said Mr Bertossa.

The G20 has asked the OECD to review the rules on multinational corporate taxation and will receive a report on progress at the G20 leaders’ summit.

According to Mr Bertossa, these rules have not seen significant review in almost 80 years, in which time multinational corporations have developed a wide range of ways to avoid tax.

“It is a scandal that working people are asked to pay more taxes and fees and receive lower quality public services when $20 trillion is held in tax havens out of the reach of governments” he explained.