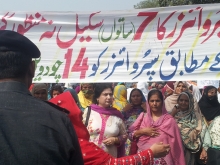 A recent report by PSI shows the abysmal employment and working conditions of community-based health workers (CHW) in India, Nepal and Pakistan and calls for the recognition of caring for the health of women and children in the community as part of the formal work of the public health system. The report further highlights the importance of the struggle for equal wage for work of equal value in the struggle against neoliberal policies. This is part of PSI's online campaign for International Women's Day. 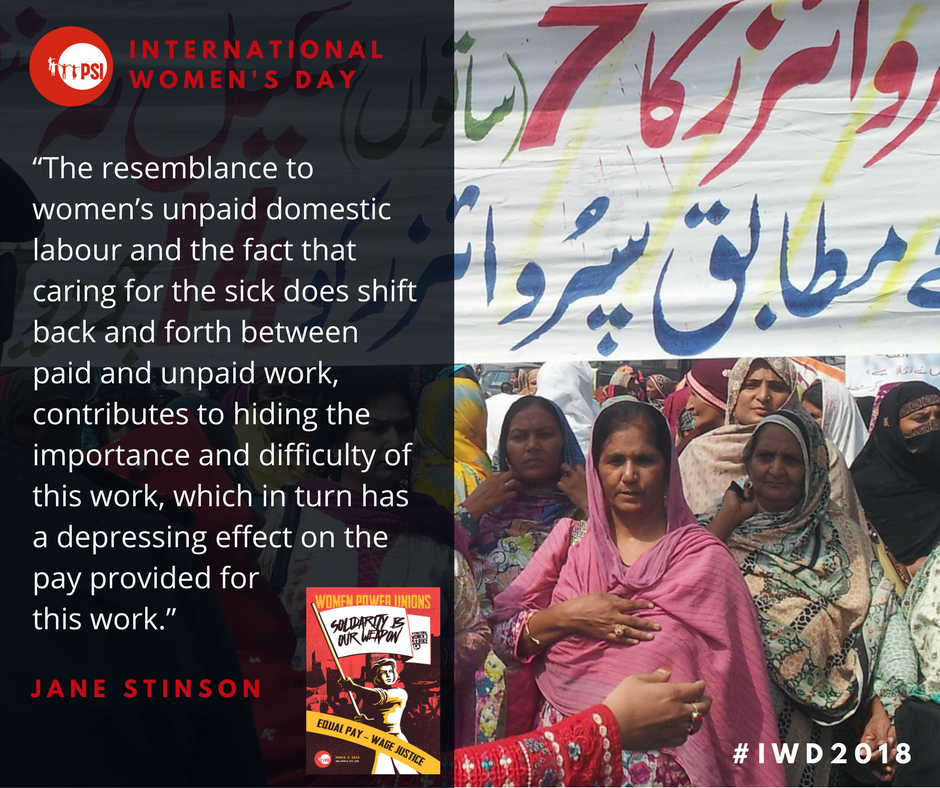 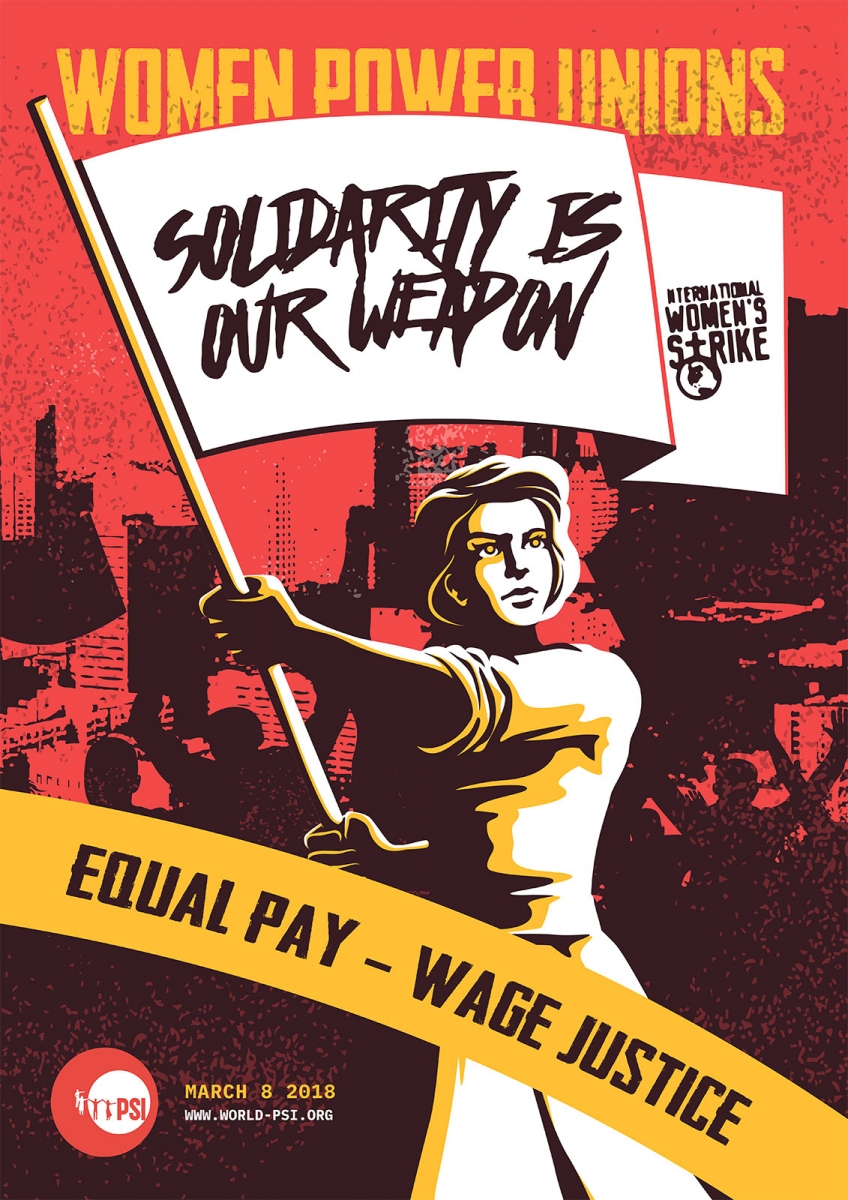 Across the South Asian region, community-based health workers are seen as necessary complements to an underfunded and neglected public health system.[1] This is even starker in the context of considerable shortages of skilled health workforce, estimated at more than 3.2 million in India, 570,000 in Bangladesh, 520,000 in Pakistan and close to 100,000 in Nepal. In India, Nepal and Pakistan, similar government programmes provide maternal and child healthcare, family planning, health promotion and education, and immunization under different names. Lady Health Workers (LHW) in Pakistan, Accredited Social Health Activist (ASHA) in India and Female Community Health Volunteer (FCHV) in Nepal provide an essential linkage between vulnerable population in rural and poor communities and the formal health system. These 1.1 million workers are mostly women from vulnerable economic backgrounds. The PSI Report argues that dominated by a neoliberal ideology, these government programmes rely on, and entrench, the understanding that the labour of CHWs is provided either at no or at low cost, to maximise the use of this vulnerable workforce in the absence of adequate government expenditure on healthcare.

Lack of recognition as workers and remuneration

Thus, despite the vital role they play, in both India and Nepal community-based health workers are not recognised as employees of the health system. In fact, they are not even recognised as workers. The Report by PSI shows that despite a work load that requires daily routine work of around 6 hours, the honorarium, allowances and incentives of ASHAs and FCHVs are equivalent to only a fraction of the prevalent minimum wage, 2/3 and 11% respectively. In both cases, the daily work-load is divided between spending time at the local health facility for administrative and data gathering work and door to door visits in the community. This is in addition to emergency and irregular requirements such as taking a pregnant woman to a health facility for delivery.

Yet, FCHVs in Nepal receive no salary but only allowances such as a dress allowance and daily allowance during vaccination drives. All together these come to around NPR 8,600 a year (USD 75), while the minimum wage for unskilled labour is 6,375 per month, i.e. 11%. As India is a federal country, ASHAs remuneration is different in each of the 36 States and Union Territories. Following an agitation by ASHA workers' unions, the central government announced a monthly honorarium of at least INR 1,000 (roughly USD 15) in December 2013. Task-based incentives provides ASHAs with a complementary income, estimated between INR 1,500 to 2,000 per month (USD 20 to 30). Thus, the minimum remuneration of ASHAs is around INR 2,500-3,000 (USD 45 a month), while the national minimum floor wage is around INR 4,500 a month (around US$ 70), i.e. two thirds. As both ASHAs and FCHVs are not recognised as workers, not only do they not receive salaries, they do not receive statutory benefits, such as pension, health insurance, maternity leave and other paid leave. 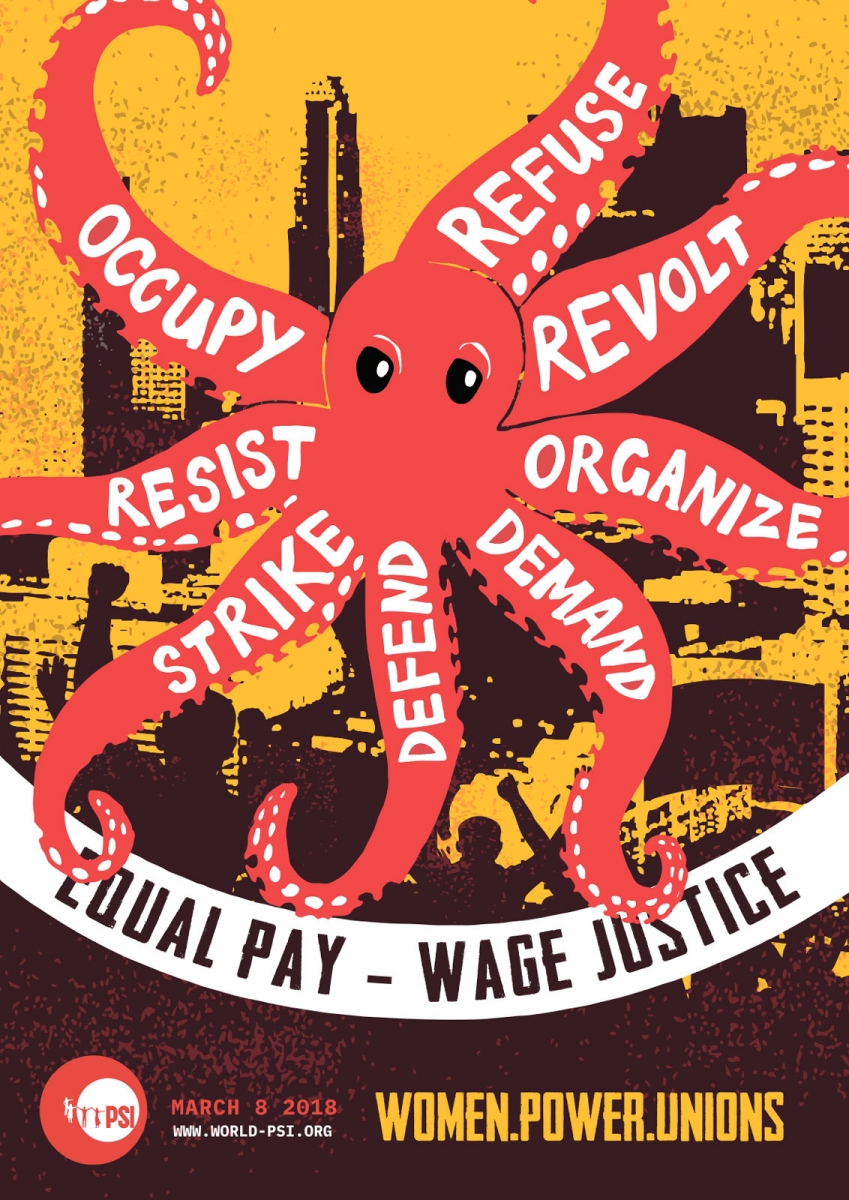 The PSI Report argues that the constructed gendered differentiation of productive and reproductive work which determines both the economic and social value of work is central to the narrative that CHW are not workers. Caring for children and women in reproductive age is constructed to be a natural responsibility and obligation of women, thus undervalued. In consequence, this work does not require as salary, as would productive work, and can instead be compensated through allowances, incentives, honorariums – all together remaining below the minimum wage. This work is low paid compared to male dominated occupations that are of equal value considering the required skills, qualifications and responsibilities, as their status as workers would entitle them to receive at least the minimum wage.

The lack of recognition as workers thus stands as a key instrument to enforce unequal remuneration for CHWs. Further, it traps women in informality within the formal public healthcare sector. Women's labour force participation rate in South Asia is amongst the lowest in the world at 30.5% (in 2010).  South Asia as a region has the highest rate of non-agricultural informal employment, ranging from 83.6% in India and 78.4% in Pakistan to 62.1 % in Sri Lanka (ILO/WIEGO 2013). Thus, women employment is overwhelmingly located within the informal sector as well as the informal component of the formal economy (ILO 2014), including in the informal component of government jobs. Yet, the prospect of a future opportunity to access a formal government job, as well as the lack of alternative work opportunities are key factors in women’s decisions to work as CHWs despite the abysmal situation regarding labour rights and employment conditions.

This unequal remuneration is at the core of the material subordination of women in the world of work and needs to be challenged. Unions of LHWs in Pakistan showed the way as they won the recognition of LHWs as workers. Through a Supreme Court case that concluded in November 2012, they established that it is legitimate that their remuneration should be at least at the level of the minimum wage, like any other worker. They are now demanding that workers with greater responsibilities and higher education level should receive higher salaries, in accordance to established salary scales. Further, in March 2013, they won the recognition of their status as employees of the public health system. Over the following 3 years, they wrestled out their absorption into the formal workforce of the public health system and the regularisation of their terms of employment.

This instance shows that unions have a key role to play in addressing inequality in remuneration between men and women. These struggles contribute to challenging the gendered construction of the economic and social value of productive and reproductive work that these inequalities stem from. Neoliberal capitalism relies on and entrenches a gendered division of labour and neoliberal policies are consolidating this process even within the public sector. Collective action by organised workers has proved to be a crucial means to mount a challenge to this system.