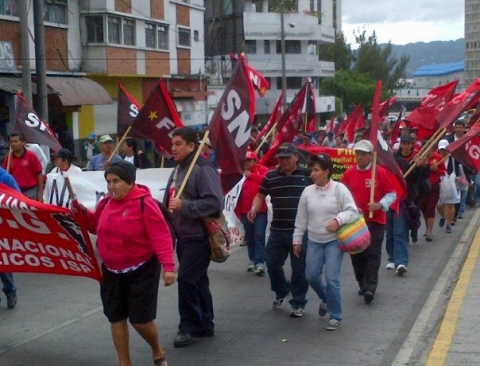 The global union federation Public Services International is leading an international delegation of trade union leaders to meet with Guatemala’s President and leading ministers on August 13-14, 2013. The delegation will press demands that the government take immediate steps to stop all violence directed at trade unions and their members and to ensure workers’ lives and legal rights are respected in Guatemala. The mission includes union leaders from Brazil, Mexico, Argentina, France, Germany, Sweden, Denmark, Belgium, and the United States.

PSI General Secretary Rosa Pavanelli says, “We are going to Guatemala to convey the international support of public services workers for PSI affiliate members in this country, and to emphasize that the global trade union movement is focused on addressing the dire situation for workers in Guatemala.”

Workers’ delegates are calling on the International Labour Organization to hold a special Commission of Inquiry into labour rights abuses in Guatemala, noting the long history of unrelenting anti-union violence and that no one has ever been brought to justice for the murder of a trade unionist in the country. Guatemala is considered to be the most dangerous place in the world to be a trade unionist today.

Guatemala’s government established an ILO Decent Work Country Program in the fall of 2012 and in March 2013 signed an agreement with the ILO and International Trade Union Confederation (ITUC) to host a high level ILO representative, to investigate and prosecute crimes against trade unionists, and to negotiate a second agreement on the exercise of freedom of association.

Pavanelli says, “We look forward to hearing what proactive steps the government has taken, further to the ILO agreement, to establish social dialogue, improve industrial relations, and to answer the crimes committed against workers with strong measures for justice. The implementation of this memorandum of understanding cannot be considered effective until there is an end to impunity for the crimes committed against trade unionists.”

In March 2013, three members of PSI affiliate unions were murdered just days after an ILO mission visited Guatemala to assess the situation of freedom of association. On March 8, 2013, Carlos Hernandez, executive member of the Sindicato Nacional de Trabajadores de Salud de Guatemala (SNTSG) and leader in several peasant organizations, was shot dead by two men carrying 9mm firearms on motorcycles. Santa Alvarado, also a member of the SNTSG, was kidnapped on March 21 after finishing work in the kitchens at the national hospital in Totonicapán. She was later found strangled. Kira Zulueta Enriquez Mena, General Secretary of the Sindicato de Trabajadores Municipales de Nueva Concepción in the department of Escuintla, was assassinated on March 22 at the library where she worked.

PSI supports the SNTSG’s plan to create an observatory to track the violation of human and labour rights in Guatemala. Pavanelli underlines, “We stand in solidarity with our members who are being targeted for simply exercising their legal rights to belong to a union, for their bravery in exposing corruption and nepotism and defending public services against privatization.”

Following the mission to Guatemala, Pavanelli says, “We will be opening a campaign to convince European leaders to suspend the special incentive trade arrangement with Guatemala for sustainable development and good governance, known as GSP+, as long as workers are being brutally abused and murdered. There can be no trade without justice for workers and their communities.”

ITUC list of violations of trade union rights in Guatemala

Committee of Application of Standards report

Background from PSI affilates in Guatemala