Women around the world stand up for social justice. Enough is enough. 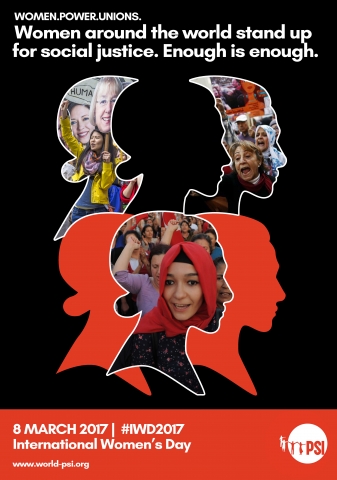 On 8th March this year, we pledge our solidarity with the millions of women in grassroots movements and trade unions around the world in saying ENOUGH IS ENOUGH! No to racism, xenophobia, homophobia. We demand autonomy and control over our own bodies. Pay equity now! Rights without borders. No more gender-based violence in the workplace and quality public services for all! #IWD2017

“While our political system is in crisis and the global economic model works for the few, not the many, women are standing up for social justice, solidarity and democracy”, says Rosa Pavanelli, General Secretary of Public Services International (PSI).

Every year, on 8th March, we celebrate International Women's Day, commemorating the strike of women textile workers in New York in 1908, when 146 workers were burned to death due to poor working conditions. This was a milestone for women’s struggle for labour rights and equality. More than 100 years later, there is still a long way to go to fully achieve these goals.

“Many people feel left behind by a system that caters only for the 1%, and is increasingly violent, both in terms of its economics and its social agenda, which will only lead to more inequality instead of a better future for the next generations. This vision is totally unacceptable to the millions of women, girls and young people who in recent months have poured out onto the streets in protest, calling for another better world based on human rights and dignity.”, continues Rosa Pavanelli.

In 1975, a historic women's strike in Iceland demanded equal pay. Last year, 41 years later, Icelandic women revived their struggle and called to close that pay gap once and for all. In October 2016, Polish women joined in mass demonstrations protesting against a draft bill introducing the criminalization of abortion, including in case of miscarriage or following rape, as a result of which the bill was rejected. The Polish action gained much resonance in the rest of the world, including in Argentina, where in October 2016 popular outrage was expressed after the killing of seven women and the subsequent repression of a national march of women, leading to a regional mobilization launched on 24 October throughout Latin America and the Caribbean. These events have led to closer cooperation between women’s grassroots organizations globally, coming together in a joint day of action. “Paro internacional de mujeres” will take place on 8 March in 40 countries, with the participation of PSI affiliates in some Latin American countries.

Juneia Batista, Chair of PSI’s World Women's Committee, says: “Women are calling for a new world order, not exclusively in terms of gender: we want social relations of a different type, a world without violence, killings, discrimination, exclusion, authoritarianism and patriarchal or neo-colonial policies”.

Candice Owley, co-chair of the PSI Regional Executive Committee for the Americas, says: “On 21st January 2017, millions of women, men and young people came together throughout the USA and in Canada, swelling into the biggest mass protest actions in recent decades, addressing immigrants’ rights, anti-racism, environmental and women’s issues. Many women protested for the first time, subsequently joining ongoing protests at offices and homes of legislators demanding answers.”

All of these protests send a message of hope and defiance against the current balance of power and herald a new era for feminist campaigns, using innovative strategies and communication techniques. These actions are all the more significant since legal restrictions are increasingly placed on campaigning by social movements, with national laws penalizing social resistance and strikes, prohibiting work stoppages and mass mobilization and attacking social and human rights’ activists.

The majority of PSI’s members are women who work in public services. We are an organisation committed to gender equality and its intersectionality.

On 8th March this year, we pledge our solidarity with the millions of women in grassroots movements and trade unions around the world in saying ENOUGH IS ENOUGH!

No to racism, xenophobia, homophobia. We demand autonomy and control over our own bodies. Pay equity now! Rights without borders. No more gender-based violence in the workplace and quality public services for all! 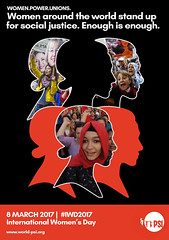 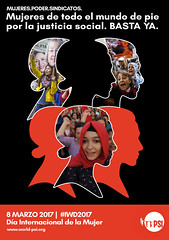 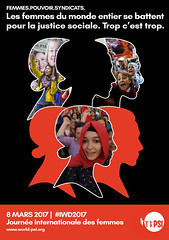