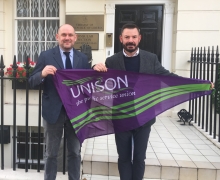 In a letter to the president of Liberia, submitted at the country's Embassy in London on November 18, Dave Prentis, UNISON's General Secretary expressed “grave concerns over the situation of workers in the health sector in Liberia”, drawing particular attention to the dismissals of Brothers Joseph S. Tamba and George Poe Williams.

UNISON lent its support to the campaign for the reinstatement of Joseph S. Tamba and George Poe Williams of the National Health Workers’ Association of Liberia (NAHWAL), and respect for trade union rights by the country’s government. 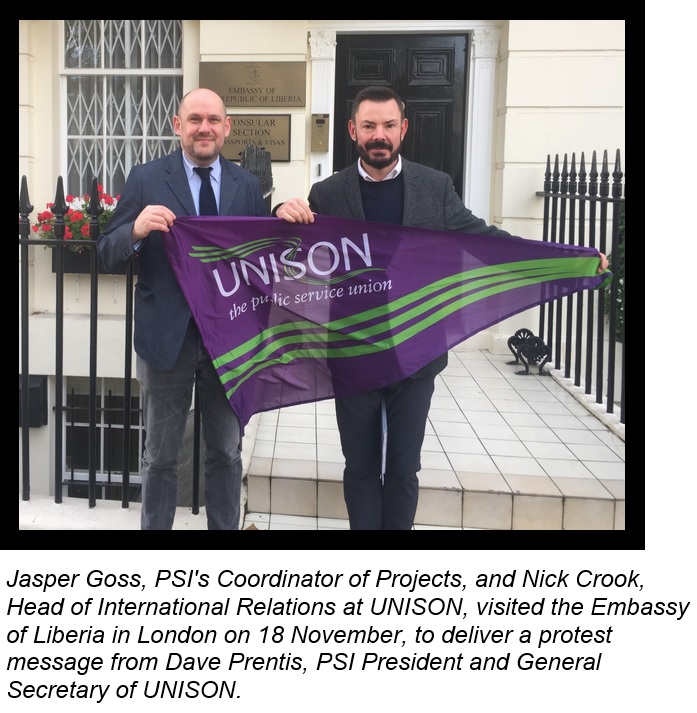 The two leaders of NAHWAL were dismissed along with twenty other members of the union for protesting against bad working conditions in the health sector. This was at the height of the Ebola outbreak in the country. Health workers, including members of NAHWAL in healthcare facilities and communities were at the fore of the Ebola response. But they were not adequately provided with Personal Protective Equipment (PPE) and medication to mitigate the consequences of exposure to the Ebola virus, even as they worked long hours to make the national response a success.

This situation led to the avoidable deaths of hundreds of health workers. For example, while 0.11% of the population as a whole died from Ebola infection, 8.07% of the health workforce lost their lives. Meanwhile, social dialogue is stifled in Liberia. Workers in the public service are prevented from forming or joining trade unions. NAHWAL and other combinations of workers are thus not legally recognised.

This however did not deter NAHWAL from organising its members for a strike and mass protest which won public support for necessary improvement in the Liberian health system. The sack of 22 NAWHAL officers on February 18 2014 was after several attempts to intimidate them failed. Following public outcry, 20 of them were reinstated. The Liberian government however remains adamant that Joseph S. Tamba and George Poe Williams, President and General Secretary respectively remain dismissed.

Liberian health workers have been organising monthly protest marches on the 18th of every month, demanding the reinstatement of their leaders and due respect for the right to organise, which is recognised by the Liberian constitution.

Public Services International has called on its affiliates and allies to “demand that the Liberian government respect the human right to organise in the public sector and for the reinstatement of…Joseph S. Tamba and George Poe Williams.” The letter by UNISON is a very commendable response to this call.

Until the victimised workers’ leaders are recalled and the right to organise in the public services respected by the Liberian government, we must continue to stand by and fight alongside sisters and brothers in Liberia. If you are yet to join the online campaign, sign the petition today here. And then go one step further, like UNISON.

Organise to join our Liberian colleagues’ manifestation on the 18th of every month. Demonstrate in front of the Liberian Embassy in your country and submit petitions to the Ambassador. If there is no Liberian Embassy, in your country, organise a manifestation with placards and banners and take pictures of these. Send reports of your actions to PSI. We will make sure the Liberian government gets the message, which is that workers across the world will not rest, until justice is done in Liberia.