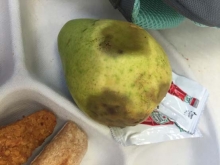 Students in Chicago were so disgusted by the school lunches provided by the private company Aramark that they decided to do something about it.

Chicago Public Schools (CPS) hired food giant Aramark to run its kitchens in 2013. They reached an agreement with the company to provide the food and obtained a federal subsidy, which meant that the food is free for the students, with CPS and Aramark receiving a combined $3.15 per lunch from the federal government.

As the lunches are free, most people would expect many students to be eating them. But surprisingly, the number dropped by about a million lunches in the first year and more than 800,000 in the second, according to CPS records.

Why are the students rejecting their free lunches? The food is of an alarmingly low grade, students say, and they claim the district’s cookbook holds nothing but recipes for small portions of processed fast foods. “Disgusting,” “soggy,” “rotten,” and “discoloured” are words they use to describe the dishes.

The students from Roosevelt High School opened a blog to draw attention to the bad quality of the food. They present their daily menu of mostly processed fast food dominated by pizza, burgers and chicken patties. Roosevelt civics student Duyen Ho believes this could create problems for their long-term health.

“I think it’s especially important for young people in Chicago — where we see so much corruption, cronyism and nepotism — that they learn how to make change within large organizations,” said Tim Meegan, who’s taught at the Albany Park school for 14 years. “This is just one of many diverse tactics that we are trying to teach young people so they are fully equipped to participate as citizens in a democratic society.”

In response to the students’ campaign, CPS spokeswoman Emily Bittner said in a statement that the district “is committed to serving healthy and nutritious meals to its students” and added that they are “look[ing] forward to working together to address their needs."

Bittner added that CPS already works with both student and parent advocacy groups to receive feedback on the district’s meal planning and is “working to eliminate highly processed, high sodium and high fat foods.”

The problem is gross school lunch. These high schoolers are fixing it.