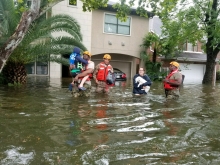 The heavy flooding last week in Texas and in parts of India, Bangladesh and Nepal is causing significant loss of life and livelihood and major damage to communities. PSI joins all in sending condolences to those affected, and expresses concern about the growing frequency and intensity of such storms and the capacity of public emergency services to cope.

These natural disasters put massive strain on local and regional governments, which are forced to scramble to alleviate the suffering of people and to restore basic public services of water, energy, transport, education, etc.

Emergency workers in affected communities are once again called on to perform acts of heroism and bravery as they attempt to rescue people and restore public services. PSI honours their professionalism, courage and dedication. These workers are called to leave their families and go to the most dangerous areas. In too many circumstances, these workers don’t have the necessary tools and training, and the different government agencies are not sufficiently coordinated. Thus, not only is their efficiency reduced, but these workers also bear unnecessary health and safety risks in the performance of their duties.

More and more, unions recognise that the solutions to better disaster response are to be found in the political sphere, requiring that unions develop political strategies to develop public policies to improve disaster prevention, response and reconstruction. These public policies and programmes are required not only to protect emergency workers, but ultimately to protect families and entire communities.

Even if we can’t attribute this week’s floods solely to climate change, it is fairly clear that the intensity and frequency of such storms is exacerbated by human-driven climate change. The rising sea levels and the increasing temperatures, both in the seas and in the air, contribute to making the storms impact heavier (warm air carries more water than cold).

The irony of the floods hitting Houston is that the city is one of the global hubs of the petro-chemical industry, which has spent untold millions denying climate change and advocating policies to shrink government, reduce regulation and social protections. The tragedy is that it is the poorest communities, whether in Texas, in India or Bangladesh, that suffer the most and have the least protection.

The climate threat requires that we examine the assumptions of constant growth, consumption and profit-seeking. It also requires that we re-assess our political structures, which increasingly are captured by the biggest corporations.

PSI is ready to do its part in this age of uncertainty, first by helping defend the rights of all public service workers and positioning the role of workers and trade unions in the social discourse that is urgently needed to solve the challenges that face all of humanity.