PPPs and the Right to Health: PSI French-speaking Africa Affiliates Call for People over Profit 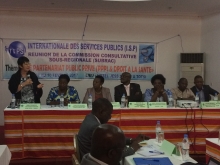 The PSI Human Right to Health campaign was launched in Francophone Africa in the first week of February. This was with a 2-day seminar on PPPs and the Right to Health, organised on the eve of the French-Speaking Africa Sub-Regional Advisory Committee meeting at Lome, Togo. 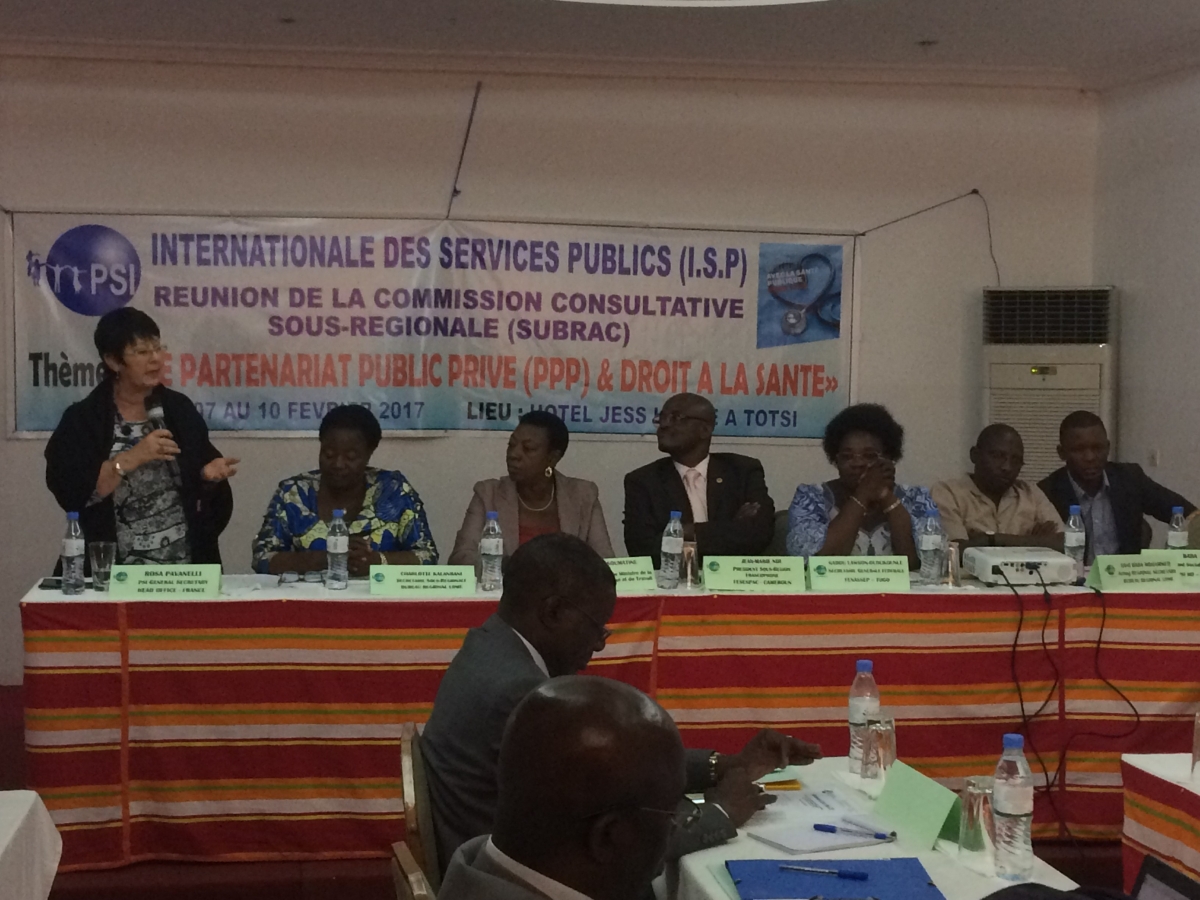 The seminar brought together over 60 participants. These included: members of PSI affiliates from Togo, Burkina Faso, Mali, Senegal, Benin, Chad, Cameroon, DR Congo, Niger and Guinea Conakry; representatives of all the Togolese trade union centres; representatives of the Togolese ministry of health; academics; leading civic organisations in Togo, and; members of the press.

Welcoming participants, Sister Nadou Lawson, Chair of the PSI Togo National Coordinating Committee pointed out that PPPs often have negative impact on health outcomes, because they are based on the profit motive as the basis for health care delivery. Wages, she also noted are adversely affected as well.

Brother Sani Baba, the acting Regional Secretary, Africa and Arab countries observed that PPPs have been taking place in several countries in the region and across a number of sectors. It used to be for the delivery of infrastructure and utilities but is now being embraced by governments as a supposed quick fix mechanism. But, as he pointed out, the results of experiments with PPPs have been mainly negative, particularly for working and unemployed poor.

The World Bank Group’s Independent Evaluation Group accepts this worrisome situation as reality in a recent synthesis report. While most of the World Bank-supported PPPs “have an explicit emphasis on the poor or underserved population in their design”, they lack the necessary “M&E indicators or proper baselines and targets—needed to track results and assess whether the poor were able to access the health services”.

At the opening session of the SUBRAC where the tasks ahead of affiliates in providing alternatives to PPPs and fighting for the realisation of the right to health in the region was further discussed, the PSI General Secretary, Rosa Pavanelli pointed out the driving force behind the increasing turn to PPPs, and particularly in Africa, in recent times:

PPPs socialise costs, at the expense of public funds to help maximize the profits of big businesses. It is part of the broader design of neoliberal globalisation which advances the argument for cuts in public funding of social services, liberalisation and privatisation. Africa has been worst hit by this anti-poor people model of development, which fosters underdevelopment, weakening health systems which have become fragile in the first place, as a result of earlier structural adjustment programmes, on the same basis.

African states, she further stressed, have to pursue alternatives to PPPs, to establish a better future for the immense majority of people on the continent. This would include nurturing Public Public Partnerships (PUPs) between national, regional and local governments as well as communities in the localities. Trade unions and the civil society movement have to put pressure on governments to resist the rising tide of PPPs and other forms of privatisation.

Representatives of the Togolese ministry of health who expressed the appreciation of the government for PSI’s hosting the SUBRAC in the country saw no alternative to PPPs because “this type of partnership is becoming the norm” globally.

During his presentation, Dr Malu, a director from the ministry said the government had no choice because “public hospitals are in a very bad shape”. This, he added, was despite major investments in health infrastructure and human resources development, and thus the reason for introducing “contractualisation”, a euphemism for PPPs.

But, Professor Couchuro from the University of Benin, in Lome argued that the for-profit motive of private investments would undermine due regards being paid to critical issues such as equity and gender concerns. Professor Wala from the teaching hospital in Lome also hammered on the fact that health is an essential service which the state is duty-bound to provide, while Charlotte Kalanbani, the Sub-regional secretary pointed out that the right to health is explicitly stated in Article 34 of the Togolese constitution.

Baba Aye, the PSI Health and Social Services Officer also debunked the contrived excuse of inadequate resources often used in justifying PPPs in the health sector in Togo and other African countries. He said more resources could be mobilised domestically by states, and allocations for health and other social services improved significantly. Multinational corporations make away with an average of US$25bn annually through tax avoidance and incentives, as well as illicit financial flows. This is much more than the “investments” private interests are expected to contribute to PPPs (for still more profit).

There is an urgent need for African governments to increase health budgetary allocations. It is intolerable that sixteen years after the African Heads of States Abuja Declaration to set aside not less than 15% of annual budgetary provision for health and social services, only two countries (South Africa and Rwanda) have met this target. In French-speaking Africa, budgetary allocation has been barely 5%, annually.

Togo is at the frontline of the introduction of PPPs in the health sector in French-speaking Africa. Sisters and brothers from other countries however shared their experiences of privatisation in other sectors. Elimane Diouf, General Secretary of the Syndicat Autonome des Travailleurs de la Sénégalaise des Eaux (SATSE) gave insight into the struggle of Senegalese workers in the face of water privatisation.

He pointed out that mass mobilisation around well thought out alternatives is essential to avoid a situation where poor people are deprived access to basic services as a result of the introduction of PPPs, thus undermining their human rights to live healthy lives with dignity.

At the end of the campaign launch, which was extensively reported by the local media, the Lome Declaration was issued. PSI affiliates and civil society organisations affirmed the critical role for public health in achieving sustainable development, calling on the Togolese state, and governments across the region to give greater policy prominence, including enhanced funding to public health care delivery.

They also demanded transparency and accountability in the health policy process. This must rest on democratic decision-making at all levels of the health system, including all social partners. The seminar ended with a commitment to deepening collaboration between trade unions and the civil society movement in the region in fighting for the realisation of the human right to health.

Read here the statement from the seminar.