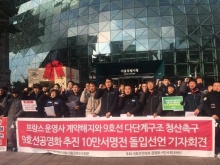 Halfway through a 10-year deal, South Korea’s capital local government decides to put an end to its contract with French private operators RATP Dev and Transdev after negotiations over renewed contract conditions failed. The announcement, on 18 January, came shortly after members of the Korean Public Service and Transport Workers’ Union (KPTU), a PSI and ITF affiliate, made public their intention to go on strike.

The decision, despite being a huge step for KPTU and its campaign to bring Seoul metro Line 9 back into public ownership and management, does not turn the line into a fully-public one - as it will now be run directly by “Metro 9”, the intermediary private company which has invested in the development of the line and currently holds a contract until 2038.

Wol-san Liem, KPTU’s director of international and Korean peninsula affairs, said: “Metro 9 is still a private company, but this takes out one layer of subcontracting. It’s a step on the road to a fully-public Line 9. The end of the RATP Dev and Transdev contract is a direct result of the campaign by Line 9 workers, which has been widely supported by civil society and public transport unions who took solidarity action”.

“The next step is to ensure that all workers affected by this change retain their conditions of employment with the new company. Then, we need improved working conditions on the line, and we can begin to push for a fully-public, accountable Line 9 as soon as possible”, added Wol-san.

The subway from hell

Line 9 is one of the most critical public transport arteries in the highly populated South Korean capital. And yet it is the only mainline in the Seoul Metro to be run by a private operator.

It has grown increasingly overcrowded and congested: pickpocketing, episodes of violence and harassment are a regular occurrence, so much so that passengers renamed it “the subway from hell”.

In 2017, the KPTU decided that the only viable strategy to fix these problems was to bring the metro line back into public hands, to secure service quality, safety, efficiency and decent working conditions and launched a campaign to do so. Since then, the union has regularly rallied passengers and civil society to the cause and Line 9 remunicipalization is now supported by over 90% of passengers.

A KPTU delegation was also present at the PSI’s Global Remunicipalization Workshop in December 2018, where it shared the union’s struggle and campaign to remunicipalize Seoul Metro line 9 with over 60 supportive public service trade unionists and allies from all over the world.

The campaign is part of the ITF’s Our Public Transport Campaign through which it got visibility and solidarity from many public transport unions worldwide.