The final week of the #TaxJustice for Women's Rights Global Days of Action has been extremely busy. These have been truly global days of action, as you will see from the photos, events and actions from around the world.

Women's, human rights, tax justice and trade union activists have been lobbying at the UN Commission on the Status of Women’s 61st intergovernmental conference in New York for strong government action for tax justice for women’s rights and gender equality.

We are proud that this is one of the first times progressive tax issues have featured so prominently in the world’s foremost conference on women’s issues. 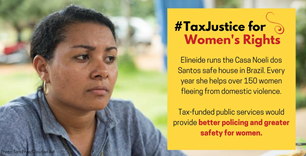 Our demands went straight to the UN Secretary General @antonioguterres, as head of Femnet Dinah Musindarwezo asked him to support a @GlobalTaxBody to stop tax dodging being a major obstacle to women’s rights and equality.

*** As we write, the final text being proposed for the UN CSW outcome document this week has deleted key tax and fiscal justice policy recommendations submitted by G77 governments. What is left, insultingly, is reference only to the so-called 'pink tax' on women's personal products, but no mention of the significant progressive tax solutions needed to address systemic economic inequalities. Please keep up the pressure on your government to reinstate this core text.***

How much do you know about tax justice for women's rights? The average score is 46%, can you beat it? Test yourself! with this fun short quiz! And share it with others. 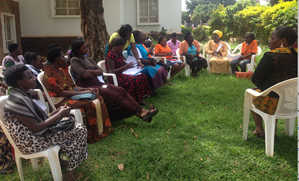 Uganda: Ugandan women make their demands on why they need tax justice for women’s rights. And the Ugandan Tax Justice Alliance held a public dialogue where the Uganda Revenue Authority’s Assistant Commissioner Milly Nalukwago spoke, whilst SEATINI Uganda had journalists covering the demands. 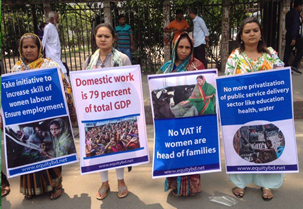 Bangladesh: Twenty-two rights-based civil society networks organised a human chain calling for reduction of VAT on essential goods, an end to privatisation of vital services such as health, education and water, and for better gender budgeting.

Netherlands: ActionAid Netherlands published this article on why women benefit from #taxjustice in Dutch, and released a video in Dutch on how tax justice can reduce women’s unpaid care burden.

Latin America: Paguen Lo Justo give 7 reasons why we need tax justice for women’s rights in Spanish. This is what a gender-just tax system looks like, say Femnet, TrustAfrica and UAFAfrica in this handy infographic.

Zimbabwe: The Zimbabwe Environmental Law Association held a workshop on #Mining4Dev, including the message that The girl child suffers most from Illicit financial flows in the mining sector.

France: ActionAid France did a photo action for #justicefiscale #droitsdesfemmes 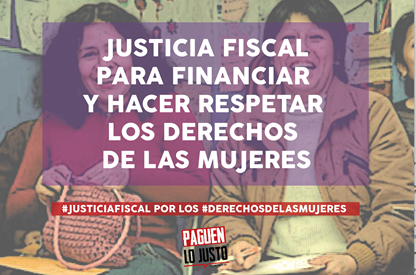