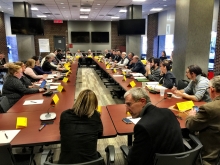 The PSI North America Binational meeting was held on March 4, 2016 in Ottawa and hosted by the Public Service Alliance of Canada (PSAC). Robyn Benson (PSAC), the Canadian titular, and Candice Owley (American Federation of Teachers-AFT), the United States titular, co-chaired the meeting. This meeting followed the Canadian SUBRAC and the United States SUBRAC, both held on March 3, 2016.

Carl Leinonen of the Service Employees International Union (SEIU) provided an overview of PSI’s health sector organizing in Brazil and the Phillippines which aims to support affiliates as they confront increasing privatization and the need to organize workers in both the public and private sectors of the public health care delivery system. Carl provided a detailed analysis of the internationally organized privatization threat and explained how the projects in Brazil and the Phillippines could test organizing methods that could be used in other developing regions, including Africa.

Lucie Martineau of the Syndicat De La Fonction Publique Du Québec, Robyn Benson (PSAC, and Candice Owley (AFT) summarized recent developments for the exercise in labor rights in Quebec, Canada and the United States respectively. It was noted that former Conservative Prime Minister Stephen Harper’s defeat at the hands of the Liberal Party in Canada in the recent national election removed the immediate threat to the Rand Formula (automatic union dues check off) and labor rights in general. However, the experience under Harper and the Conservatives should never be forgotten and has moved most PSI affiliates in Canada to greatly expand on member outreach activities.

Strategic Consequences of the Friedrichs Case in the USA

Paul Booth of the American Federation of State, County and Municipal Employees (AFSCME) of the United States provided an analysis of the pending Friedrichs case before the Supreme Court. The case challenges the constitutionality of automatic dues checkoff in the public sector and threatens the financial foundation of public sector unionism in the United States. Paul commented that the recent death of Supreme Court Justice Antonin Scalia leaves the court with eight (8) members and a likely tie in the Friedrichs case. This outcome would provide a “reprieve” to PSI affiliates by maintaining the finding of the lower court that found such automatic dues check off as constitutional, but a similar case is likely to make its way to the Supreme Court in the next several years. Paul concluded that the public sector labor movement must take full advantage of this reprieve to conduct intensive member outreach efforts and reinvent the movement’s financial foundation.

Scott Chamberlain of the Association of Canadian Financial Officers (ACFO) and Richard Perron of the Syndicat de Professionnelles et Professionnels du Gouvernement du Québec reported on recent affiliate and PSI efforts to campaign for tax justice and against corruption. Scott reviewed the progress made through last year’s Funding Democracy event in Ottawa, spearheaded by ACFO and supported by many Canadian affiliates. Scott noted the Ottawa Declaration (http://www.fundingdemocracy.com/en/the-vision/ottawa-declaration/) and how it might frame future work. Richard reported on the ongoing efforts to fight corruption in Quebec and pass a 21st century Whistle Blower Protection law (read the French version here: http://www.assnat.qc.ca/fr/travaux-parlementaires/projets-loi/projet-loi-87-41-1.html) to prevent corruption in contracting and other forms of malfeasance.

Mike Dolan of the International Brotherhood of Teamsters and Blair Redlin, Co-Chair of Canada’s Trade Justice Network, presented analyses of the ongoing trade negotiation and ratification processes for CETA, TPP, TTIP, and TISA. Mike reported the progress of PSI’s trade related strategy and how increasing numbers of affiliates are working with PSI to stop negotiations and ratification. He noted his own experience in the United States and how close the labor movement came to stopping “fast track” trade negotiation authority and current efforts to stop the ratification of the TPP. Blair provided an analysis of the Liberal Party government and its trade policy under Prime Minister Trudeau, noting that Trudeau is committed to the ratification of CETA and TPP. He noted the increasing opposition in Europe to CETA and how this may complicate Trudeau’s advocacy of the agreement as he moves toward final ratification. Both Mike and Blair agreed that PSI coordination on trade is an effective way to build momentum and reverse the current tide of trade negotiations with an eye on defeating TISA.

Mark Langevin reported on the recent PSI Global Leadership Meeting on Privatization hosted by AFSCME and held in Washington, D.C. (see attached meeting report). He noted that PSI is introducing a biweekly press clipping service that focuses on privatization around the world. Mark also noted that he hopes to work with affiliates to build a virtual anti-privatization tool-kit to assist all affiliates determine how best to confront privatization within their members’ sectors. Louise Chabot of Centrale des Syndicats du Québec (CSQ) reported on ongoing efforts by the Liberal Party government of Quebec to privatize key educational and health functions, as well as the restructuring of the public health care delivery system to facilitate privatization. She also mentioned her union’s efforts to counter privatization, as well as other PSI affiliates in Quebec, through both member and community engagement strategies.  Mark Hancock of the Canadian Union of Public Employees (CUPE) pointed out the ongoing efforts to privatize municipal and provincial public services, noting the constant threat and experiences where community mobilization and elections led to successful opposition of privatization projects. J. David Cox of the American Federation of Government Employees (AFGE) of the United States reported on mounting threats to privatize key functions of the Department of Veterans Affairs with the a focus on its health care delivery system. J. David mentioned that the system is the most efficient in the United States, but that right-wing political organizations are bent on undermining the effectiveness and legitimacy of the Department, cutting its budget, and eventually privatizing many of its major functions. The discussion demonstrated a strong consensus that PSI advance its anti-privatization work plan and strategy.

Kevin Skerrett, a CUPE National Senior Researcher who focuses on pensions, provided an analysis of the use of public pensions to privatize public services, and their increasing involvement in public-private partnerships.