Unions share strategies on fighting back, ahead of Janus vs AFSCME Supreme Court Case 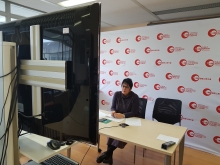 PSI General Secretary Rosa Pavanelli chaired a video conference with union leaders from across the world today to address the dangerous upcoming US Supreme Court case “Janus vs AFSCME.”

The case threatens to remove the right of public service unions to collect “fair-share” payments from workers who they represent in collective bargaining but who are not union members.

“They have set out an agenda to defund, demean and destabilize our unions,” said American Federation of Teachers President Randi Weingarten.

“The dark money funders of this case are attacking us because we are fighting for a better life for working folks - they see this as a threat to their economic and political power. ”

The case began after republican Governor of Illinois Bruce Rauner attempted to pass an executive order which courts then ruled illegitimate. Bankrolled by CEOs and billionaires, the forces behind Janus seek to weaken the freedom of public service workers to join together in strong unions.

The case is of international importance because of a range of similar legal attacks on unions in other countries, said Pavanelli.

“We have seen aggressive actions such as these springing up against unions across the world such as the Trade Union Bill in the UK. These are clear attempts to curb the power of workers to organise and the power of trade unions to represent workers. It’s a way to divide workers and to impose the supremacy of employers over organised labour.”

“By sharing information and organizing together at the international level, we can share knowledge, tactics and fight cases like these together.”

A wide range of high profile lawyers, academics and even some conservative politicians have voiced their support for the unions in the case.

“Because of the similar attacks in the Trade Union Act,we have had to resign over 4000 collective agreements. These are attempts to weaken our political voice, as anyone joining the union now has to opt-in to our political fund.”

“In the 1990s we lost the ability to make payroll deductions - we went from 22,000 members in Victoria state to only 200 overnight. We’ve now brought ourselves back to 15,000 members.  We developed a database of our workers to help this process which we would be happy to share with American unions if needed. They tried to kill us and we survived so I hope that, regardless of the case, this can give some hope to our colleagues across the world facing similar threats.”

Tim Beaty from the Teamsters, one of the unions supporting AFSCME in the case, described how this struggle is enabling unions to connect with young people, and leading to an increasing mobilisation among millenials.

All the unions involved in the call agreed to give strong visibility and support for the American Unions on their day of action February 24th, when demonstrations will take place across the country.