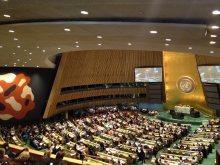 On 25 September, the UN’s new 2030 Agenda was adopted in the presence of the world’s top leaders at a special session of the Annual General Assembly of the United Nations. This year also marks the 70th Anniversary of the UN, which lends additional momentum to this new global agenda for sustainable development, which should lead the world out of poverty and save our planet.

PSI’s and the trade union movement’s broad objectives going into this process, full and productive employment and decent work for all, universal social protection, the human right to water and sanitation, universal free quality education, health care for all, gender equality and reducing income inequality, are by and large reflected across the Declaration and in the Sustainable Development Goals (SDGs) and Targets.

However, PSI remains very critical when it comes to the SDGs supporting framework, which is the means to implement and effectively monitor them. Throughout the SDGs and negotiations on Financing for Development (FFD3), PSI has held the opinion that this agenda could end up being a vehicle for privatization and maintaining the status quo. Unconditional criteria are needed to ensure that private sector intervention is in line with the public interest, especially where public resources are used to support the private sector.

Rosa Pavanelli, PSI General Secretary says: “With well-funded quality public services it will be possible to reach the SDGs, not by totally uncontrolled privatization and Public-Private partnerships (PPPs) with profits for business and reduced access to health, education, water and energy for the population. There is an important role for the private sector in development - in the first place by paying decent wages, taxes and respecting labour and ecological standards. PSI will continue to work with its allies in the coming year, calling for an intergovernmental tax body and the exclusion of essential public services from PPPs.”

One of the preferred vehicles for the implementation of this agenda is the creation of Global Partnerships, which are multi-stakeholder coalitions that aim to contribute to one or more goals. Whereas many new partnerships are being announced there are distinct fears that this is the beginning of a new era of selective multilateralism, shaped by intergovernmental policy impasses and a growing reliance on corporate-led solutions to global problems. We need to ensure the participation of workers in these partnerships, while clear governance structures and accountability of such Global Partnerships need to be resolved urgently. In addition, there is a lack of focus on much-needed public policies that are more sustainable and little or no attention for alternative models of development, such as the social and solidarity economy.

Rosa Pavanelli continues, “At the occasion of the World Day for Decent Work, we call on all governments to recognize the central role of Decent Work for the implementation of the 2030 Agenda. Poverty will not be addressed as long as living wages are not paid to every worker. Today millions of public service workers are paid misery wages and are in precarious employment. We also call for a renewed commitment of governments to freedom of association and the right to collective bargaining, which are the real instruments to combat inequality and generate broad-based social and economic growth. Finally, we need governments to resolve the plight of millions of refugees and migrant workers as a matter of utmost urgency. We need more than declarations on how to change the world – we demand the respect of our human and worker’s rights.”