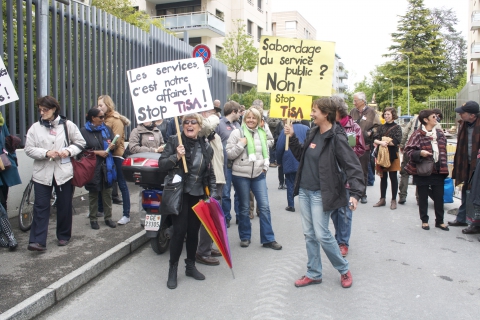 Fronting themselves as the ´Really Good Friends of Services,’ a group of 50 countries—representing an estimated 70 per cent share of the world’s trade in services—are secretly negotiating the TISA. This deal will open up a wide range of public services to be sold permanently for private profit.

This massive trade deal will put public health care, child care, postal, broadcasting, water, power, transport and other services at risk. The TISA will lock in the privatisations of services—even in cases where private service delivery has failed—meaning governments can never return water, energy, health, education or other services to public hands.

The TISA will also restrict a government’s right to regulate stronger standards in the public’s interest. For example, it will affect environmental regulations, licensing of health facilities and laboratories, waste disposal centres, power plants, school and university accreditation and broadcast licenses. The proposed deal will also restrict a government’s ability to regulate key sectors including financial, energy, telecommunications and cross-border data flows.

The TISA will specifically limit the ability of governments to regulate the financial services industry at exactly the time when the global economy is still recovering from a crisis caused by financial deregulation.

Responding to today’s leak, Public Services International General Secretary Rosa Pavanelli says, “This agreement is all about making it easier for corporations to make profits and operate with impunity across borders. The aim of public services should not be to make profits for large multinational corporations. Ensuring that failed privatisations can never be reversed is free market ideology gone mad.

“The secrecy surrounding these negotiations to extend controversial GATS arrangements into a wide range of areas previously rejected is anti-democratic in the extreme. If our governments are doing nothing wrong – why are they hiding these texts?

Pavanelli adds, “The attempts by governments still reeling from the global economic crisis to further deregulate the financial system shows that our trade ministers really have been captured by large corporate interests. When you understand this, you understand why the texts are being kept secret. This is a bad deal for people and our planet. We demand that the texts be released for public scrutiny now.”